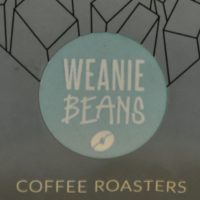 Weanie Beans, the subject of the first Meet the Roaster of 2017, is one of the lesser known names in speciality coffee roasting, although the company, and its founder, Adeline, go back all the way to 2007 and market stall in west London. Along the way, Adeline used to have the patch at King’s Cross now occupied by Craft Coffee, who took it on from Noble Espresso, who took it on from Weanie Beans…

These days you can find Weanie Beans roasting coffee in its new north London home and, while the market stalls are gone, there is a new café, Heirloom, in the Buckinghamshire village of Edlesborough. Although best known for its espresso blends, such as Citizen Kane, and its seasonal espresso blend, Weanie Beans is branching out. It roasts bespoke espresso blends for cafés such as &Feast (Barnes and Sheen) and is increasingly roasting single-origins for filter. Recently it’s launched a new espresso blend, Scout, which is proving a big hit in Heirloom.

As well as finding Weanie Beans at a growing number of London coffee shops, you can buy all the coffee from the Weanie Beans web shop. There is also an increasingly popular monthly subscription service.

Weanie Beans began in 2007, Adeline launching a crusade to bring better coffee to south-west London, starting with markets stalls in the likes of Chiswick, where she sold Climpson and Sons beans at the weekends. One thing led to another and, by the time I started the Coffee Spot in 2012, Weanie Beans was an established name with a stall around the back of London’s King’s Cross station.

However, before I had a chance to visit, Adeline decided to call it a day. Pregnant with her first child, she decided that standing outside in all weathers making coffee was not necessarily the best idea… The market stalls continued and it was only at the end of last year, when Adeline opened her new café, Heirloom in Edlesborough, that they came to an end after almost 10 years of operation.

Along the way, Weanie Beans, the coffee bean retailer, turned into Weanie Beans, the coffee roaster. Two years ago, Adeline started roasting, getting both her roaster (a 15kg Toper) and her roaster (a Lithuanian by the name of Pepe) from Climpson and Sons. Initially it was just Adeline and Pepe, who roasted one day a week, but things have been steadily growing, with Pepe now roasting three or four days a week. Towards the end of 2016, Adeline stepped back from day-to-day operations at the roaster to focus on the new café, employing friend of the Coffee Spot, Jess of EastingEast fame, to manage the roastery.

I popped by two weeks ago, before my latest USA trip, to check out the latest developments. Weanie Beans occupies a small space in a large unit on the Crusader Industrial Estate in north London, not the easiest place to find. Ostensibly, my visit was to check out the new Scout espresso blend, but before that, Jess treated me to a couple of the single-origins that Weanie Beans roasts for filter. Most of the green beans come from the usual suspects in terms of green bean importers, but Adeline has used her contacts to get some rare microlots, so expect the occasional bean that you won’t see elsewhere.

We started off with a rich, fruity Latumba from the Democratic Republic of Congo. I’m starting to see more coffee from the DRC, but it’s still quite rare and therefore a bit of treat. Despite its complexity, this was a surprisingly mellow cup through the V60. This was followed with a Pacamara varietal from the Isnul Estate in Huehuetenango, Guatemala, which impressed no lesser a judge than Caffeine Magazine, which placed the coffee in its top five last issue. Another juicy coffee, this one excelled as it cooled.

Finally, it was onto the espresso and the aforementioned Scout blend (70% Colombia Agustino Forest, 20% Brazil Ipanema Estate and 10% Ethiopia Guji G2). I had it as a piccolo and was very impressed, the coffee’s rich complexity blending perfectly with the sweetness of the milk.

As a parting gift, Jess gave me a bag of the new seasonal blend (which is being rebranded as “Flux”). This contains 45% of the Congo, plus 45% of a Costa Rican coffee, with the remaining 10% from Ethiopia. It’s been going down a treat in my Espro Travel Press as I make my way across Arizona and California.

If you’d like to know more about Weanie Beans, try this 2012 interview from Henry of Lyndon’s Coffee. You can also see what fellow coffee bloggers Bean There At and Double Skinny Macchiato (Bex) made of the Weanie Beans breakfast open day (21st January).

If anyone else attended the breakfast and has written it up, let me know and I’ll pop the link in here.