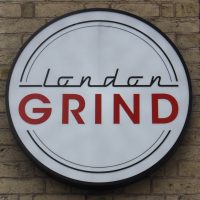 London Grind, at the southern end of London Bridge, was the first of London’s growing Grind chain to offer full restaurant service in addition to its tried and tested espresso bar by day/cocktail bar by night model. It’s also undergone a recent expansion which has added a large seating area at the back and more than trebled the size of the kitchen.

There are several seating options, largely depending on why you are at Grind. If you’re dining, then there’s the aforementioned seating area, while if you are here for the espresso bar (day) or cocktail bar (evening) then you can sit at the counter. As a half-way house, a range of tables with padded benches lines the front wall where you can sit sipping your coffee/cocktails or having a more informal dining experience. As well as breakfast, lunch and dinner menus, there are also cakes and, at lunch-time, sandwiches.

This was the first time I’d visited a Grind since the chain started roasting its own coffee in its new Shoreditch HQ. In keeping with the tried and trusted Grind model, there is both a house-blend (for milk-based drinks) and single-origin (espresso, Americano, etc) on espresso, as well as decaf.

London Grind occupies a handsome building at London Bridge’s southern end, with access from the bridge itself. There are two doors, one from the street at the left hand end, the other from the lobby of the adjoining building at the right-hand end. London Grind offers two distinct spaces, the result of its recent expansion.

Along the front, there’s the original London Grind, stretching between the front door (left) and side door (right). A row of tables lines the front wall, while the counter occupies the back. Entering by the right-hand door, London Grind still gives the impression of a classic Grind espresso/cocktail bar. Indeed, had you come here a few months ago, that’s all there was to it.

However, entering by the left-hand door, as I did, you see a very different London Grind. This stretches out ahead of you behind the left-hand end of the counter. Here is the large, high-ceilinged dining area with three rows of tables, one along the left-hand wall, one down the middle and one down the right. The two outer rows continue along the back wall to form a horse-shoe like arrangement. Talking of horseshoes, the counter also wraps around 180⁰ at the left-hand end, offering classic bar seating on either side, while to the right, you can sit coffee-shop style, facing the espresso machine.

I visited London Grind twice, once just before Christmas for dinner and again in the New Year when I just missed the breakfast service (which stops at noon). Thereafter it switches to a lunch service and, since I didn’t want a big lunch, I instead sat at the counter for an espresso and slice of mandarin cake (a very fine moist sponge with chunks of chocolate). Sitting there, I was reminded of how much I enjoy being at the counter, something I rarely do these days.

My espresso was a Rwandan single-origin which Grind uses in all its non-milk drinks. This was the first time that I’d visited since Grind started roasting its own coffee and while it was okay, I recall liking the espresso more when it was roasted by Brighton’s Small Batch. However, this may have as much to do with seasonal variation in the beans as the change in roasting.

My previous visit had been for dinner when I’d sat in the new extension. In contrast to the other Grinds I’ve visited (Soho Grind and Shoreditch Grind) this felt much more like a restaurant doing good coffee than a coffee shop doing great food. Whereas you’d normally expect to find baristas taking your order in a coffee shop, here it was all front of house staff and waiters. Not that it’s a bad thing, just a very different experience.

For dinner, I had an excellent mushroom gnocchi. Gnocchi can sometimes be very heavy, but these were light and tasty. There were also lots of mushrooms which really added to the dish. I followed this with apple crumble for dessert, which was served in a glass. I’m not convinced that this is the best way to serve it, but it was excellent nonetheless. Big chunks of apple with cloves and an oat-based crumble, plus vanilla ice cream on top, it was delightful, while the glass at least meant that the ice cream didn’t melt too quickly.

December 2017: London Grind has won the 2017 Coffee Spot with the Best Lighting Award.

Disclaimer: in 2015, Grind launched a bond to fund its current expansion. I invested in this bond, and, like all bond-holders, receive free coffee as a reward (although I still have to pay for everything else). My decision to write about London Grind was in no way influenced by my investment.