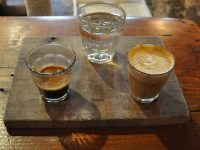 Along with Press Coffee, a chance discovery on my first visit to Phoenix, the other big name in Phoenix coffee is Cartel Coffee Lab. Another roaster/coffee shop chain, Cartel has multiple locations, including at Sky Harbor Airport (one of my favourite airports), downtown Phoenix, Scottsdale and Tucson. In a departure from the Coffee Spot norm, my introduction to Cartel was visiting its original branch, the coffee shop/roastery, in downtown Tempe.

A large, sprawling spot, Cartel consists of multiple, connected spaces, which betrays its roots, since Cartel started in just one small part of its current home, slowly expanding to incorporate the additional spaces over the years. Further expansion is in the pipeline: the roastery (currently along the left-hand side in the front part of the store) will soon be shifted into the adjacent building at the back of the store.

Cartel, which never roasts blends, has six single-origins, including a decaf. All are available as filter through Aeropress, V60, Clever Dripper and Chemex, while one (plus the decaf) is available as espresso. There’s also a daily option on bulk-brew, cold brew and, if you’re hungry, a small selection of cake. If you don’t fancy coffee, there is a small tea selection too.

Cartel is in University Square, a small mall on the corner of Ash Avenue/West University Drive. Depending on which door you use (it has two, one on Ash and the other down the right-hand side in the parking lot), your initial impressions of Cartel will be quite different. I entered what I consider to be the front door on Ash, although the other door was actually the original entrance.

Based on the shop front on Ash, there doesn’t look to be much to Cartel. However, step inside and your perceptions soon change. For a start, it goes a long way back. It’s also wider than the small window to the left of the door would suggest.

Two rows of tables run back towards the counter. The right-hand one is against the wall, but on the left, Cartel currently has its roastery, starting with the sacks of green beans at the front and ending with the small, red San Franciscan roaster at the back. The second line of tables therefore runs along the divider separating the roastery from the coffee shop.

This puts the roasting at the heart of Cartel, particular since the barrier is only a metre high. This will be lost when the roastery is moved to the rear of the store (an essential step since the San Franciscan is already at capacity), although there are plans for a window in the back wall so you can still see the roastery.

Before the left-hand row of tables gets going, there’s an eclectic mix of seating, including a window bar, tables, a bench-seat and a sofa. It’s busy in the front part, with a very student-looking crowd (the university is across the road) and a high proportion of laptop users.

When you reach the counter there’s a surprise in store. To the right, a deep bay contains more tables, while the counter carries on beyond what I took to be the back wall, wrapping around to almost form an island. On the left, beyond the roaster, is more seating: round tables and a bar against the left-hand wall, while beyond the counter, Cartel stretches out to the right, providing a quieter, more relaxed space. A row of padded benches lines the back wall, arranged into three bays. You can also sit at the counter itself, watching the pour-overs being made. Finally, to the right, past the counter, is another pair of tables beyond which is the door to the parking lot.

Cartel has six single-origins, one of which (the Carmen, a washed coffee from El Salvador during my visit) is on espresso. Cartel buys coffee in lots of in varying sizes and when it’s gone, it’s onto the next one. The espresso usually lasts three to five months, while there’s something new on the menu every month.

Spoilt for choice, I went for espresso, my barista recommending the “one-and-one” (otherwise known as a split shot). This is served as a single espresso/piccolo, beautifully presented on a wooden tray with a glass of slightly-sparkling soda water as a palate cleanser. Although I didn’t have one, I was pleased to see the same high standards being applied to pour-overs, which were served in carafes with a cup on the side.

Back to my one-and-one. The espresso was a little old-school, but in a good way. Well balanced, with just a hint of bitterness, it went down very smoothly. In milk, it was even better, the milk complementing the coffee, neither component dominating. The milk really brought out the espresso’s chocolate notes, while a piccolo was the perfect size/ratio to highlight the coffee.

December 2018: Cartel now only serves its pour-over through the Chemex, with a choice of two sizes, 8oz and 16oz. It’s also ventured out of Arizona for the first time, opening a coffee shop just over the state line in Palm Springs, California.

You can see what I made of all the other branches of Cartel Coffee Lab that I’ve visited. Also, if you liked this, then take a look at the rest of the Phoenix speciality coffee scene with the Coffee Spot Guide to Phoenix.