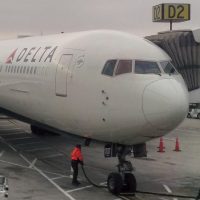 Welcome to the fifth of the occasional Brian’s Travel Spot series, where I attempt to document my various travels around the world. The first of these was back in 2015, when I did my coast-to-coast trip across the USA by train, followed by a return visit to the US this time last year. 2016 was a good year for travel, with a brief sojourn in Porto, followed by a round-the-world trip via Hong Kong, Shanghai and Chicago.

This, the first Travel Spot of 2017, sees me off on a month-long trip around the US, starting with a return to Phoenix. When I started writing this post, at the gate in Heathrow’s Terminal 3 while waiting for my flight, I began with a brief recap of my first visit to Phoenix, which had taken place just three months before, at the end of the previous October. Since then, I’ve moved that content to its own post, part of a larger series about that trip, so this post now just covers my flight out to Phoenix at the start of this trip, after which I embarked on what I called The Grand Adventure, a week-long drive from Phoenix to San Francisco.

You can see how the flight went after the gallery.

In 2017, British Airways was the only airline which flew direct to Phoenix, making the choice something I’d described as a “no-brainer” on my previous trip. So it might come as something of a surprise that I’m typing this while sitting in a 767 belonging to Delta Airlines, en-route for Salt Lake City and a rather tight 90-minute connection. Keep reading to discover whether this was a good idea or not!

So why Delta? And, perhaps more importantly, why not British Airways? Well, as I’ve repeatedly said, these days I pretty much have to have a bulk-head/exit-row seat so that I can work on the plane. When I came to book the flights for this trip, I’d left it rather late (for various reasons, the trip wasn’t confirmed until a month before I was due to fly). By then, all the economy seats with any extra leg room on the British Airways flight had gone, so I looked at alternatives, eventually deciding on the Delta flight I’m now on.

I did this with some considerable trepidation. In 20 years of transatlantic flying, I’ve usually gone with British Airways or Virgin Atlantic. In fact, I’ve only flown with US airlines three times, once with the defunct Continental on a Virgin codeshare (which was excellent), once with American (on a British Airways codeshare) and once with United on a return trip to Chicago. Those last flights, with American and United, both over five years ago, were not great experiences, flying on old aircraft (one even had TV monitors that came down from the ceiling, with everyone in economy watching the same movie) and with relatively poor service.

While I can’t speak for American or United (I’ve since flown with both to and from Chicago: while the United flight was okay, flying with American was excellent), my fears regarding Delta have been entirely unfounded. I’m on a modern, spacious Boeing 767-300, with nicely-spaced seats, a modern entertainment system (which I’m not watching, although I am using the map to keep track of where we are) and a lovely, attentive crew. The food is very good and even the coffee is a notch above drinkable!

I’ve nabbed a bulk-head seat, a far better option than the over-wing exit rows, which are right next to the toilets and have a lot less room. The seat next to me is empty (it has a broken tray table, so the person there got moved and, no, I didn’t break it, although now I come to think of it, it’s not a bad idea…) so I can spread out. In fact, this might be the most room I’ve had on a plane! Best of all, there’s at-seat power, so I’m very happy with the whole set-up. The in-flight Wifi is even pretty speedy, although it is a tad pricey ($10 for an hour, $30 for the whole flight).

The flight itself was smooth and uneventful, something I never tire of saying. The only slight grumble was that we ran into some turbulence a couple of hours into the flight. That’s nothing I have a problem with, but the captain, having turned the seat-belt signs on, then left them on for another three hours, during which time there was no turbulence at all. While I appreciate a cautious approach, I really need to get up and walk around during flights and having the seat belt signs on for three hours when there doesn’t seem to be any turbulence is a real pain.

The knock-on effect of this is that while I didn’t mind getting up to go the loo (and the cabin crew didn’t mind either) I really didn’t think I could stroll all the way to the galley at the back of the plane to ask for a jug of hot water. As a result, I never did get to make any coffee…

You can see whether I made that connection at Salt Lake City after the gallery.

I’ve never been to Salt Lake City (and don’t really count changing planes there as “going to Salt Lake City” either). However, on the basis of what I saw from the plane, I could be tempted. After flying over a largely frozen Canada, and an equally frozen Montana, we hit gold when we finally reached the Rockies.

Not having anyone in the seat next to me meant that I had full access to the window, something of a rarity for me. However, I belatedly realised that I had chosen to sit on the wrong side of the plane, having selected the left-hand side without giving it much thought. Of course, if I’d bothered to look at a map, I’d have seen that I would be flying south along the eastern side of the Rockies, and so should have sat on the right-hand side… where I’d have had someone next to me… and so wouldn’t have been able to gawp out of the window… Perhaps it wasn’t such a bad choice after all!

Despite this, the views of the Rockies on my side of the plane were pretty special, but the best was still to come. As we started to descend towards Salt Lake City, we appeared to be flying above a long, straight valley, with some glorious views of the mountains which lined the valley’s sides. Then, as we neared Salt Lake City itself, the valley was suddenly filled with cloud, with us flying above the cloud, but descending ever lower until we were flying almost level with the top of the cloud and below the peaks of the mountains. That was a really magical sight.

Then, of course, we disappeared into the cloud itself where the views were less interesting.

I had been a little concerned about the tight layover at Salt Lake City, all of 90 minutes, but I’d reassured myself that it would be fine. Although Salt Lake City is a Delta hub, it’s not a major destination and therefore I reasoned it would only have a few international flights. This is important because clearing immigration was going to be the biggest challenge: there have been times in major airports such as Boston, New York and even Chicago, where I’ve been waiting for over an hour to get through passport control.

As it was, I needn’t have worried. We hit the ground 30 minutes early, and from that point to my clearing security at the domestic gates, a mere 45 minutes had passed, leaving me with plenty of time to kill. Just long enough for my by now-legendary laptop keyboard to once again show its unreliability. I’d been using it the entire flight with no problems, but at the gate in Salt Lake City (which gets bonus points, by the way, for having lots of power outlets), I think I managed to type about two sentences and had to reboot the laptop twice. Bizarrely, I’m typing this on flight from Salt Lake City to Phoenix and I’m having no problems at all…

Credit where credit’s due, though. Going back to Salt Lake City, the airport is clearly set up for these sorts of connections, with a dedicated line at passport control for people with connecting flights. It was also the case, as I’d predicted, that we were the only international flight arriving at that point. I was through passport control so quickly that the plane hadn’t even been unloaded and when it was, my bag, which had been tagged priority at Heathrow, was the first onto the carousel, something that’s never happened to me before.

From there, it was through customs, through a door and there were the Delta ground crew to take my bag off to the plane for me. I think I must have carried it maybe 20 metres after picking it off the baggage carousel.

The flight from Salt Lake City to Phoenix was going from the sublime to the ridiculous. Having had perhaps the most space I’ve ever had on an aircraft (it’s neck-and-neck with the A380 to Dubai/Hong Kong), I found myself on a regional shuttle flight, operating a Bombardier CRJ700 (no, I’d never heard of one either). It had two engines at the tail and two rows of seats, holding maybe 65 passengers in all. It was full, too, and a real struggle to get everyone and their luggage on board and stowed away.

However, it did the job, got us to Phoenix on time and there were more wonderful views of the Salt Lake City mountains as we took off, although once again I sat on the left-hand side, while the right-hand side of the plane got treated to an amazing sunset. Oh well, you can’t win them all.

Check out Part II of the series, snappily entitled My Return to Phoenix, to see what I got up in the city before I set off on The Grand Adventure itself.

41 thoughts on “Brian’s Travel Spot: Phoenix and the Grand Adventure”