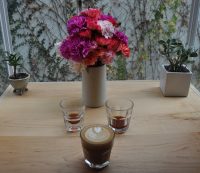 That I ended up in Los Angeles in the first place, let alone having coffee at Go Get Em Tiger, is entirely down to Lee of Silhouette, who, while I was discussing my current trip, simply would not believe that I was going to drive past Los Angeles and not call in. So, I decided to change my plans and spend a day in LA, visiting coffee shops and being a tourist (Lee, I loved it!).

Go Get Em Tiger is on Hollywood Boulevard, in the Los Feliz neighbourhood, sharing a space with McConnell’s ice cream parlour, which is on the right, with Go Get Em Tiger on the left. Long and thin, there’s no seating inside, just “standing” down the left-hand side at various broad window-sills. To sit down, you need the raised terrace in front of the shop, which is normally a good option, unless you arrive on one of the (rare) days when it’s been pouring with rain…

Go Get Em Tiger is a multi-roaster, with two options on espresso and two more on batch-brew. It also has a good range of cakes and an impressive brunch menu (7am to 4pm) cooked in the open-plan kitchen at the back on the right.

One of Lee’s recommendations was Go Get Em Tiger, which just happened to be conveniently-located near my hotel (although I might have chosen the hotel for its proximity to Go Get Em Tiger…). However, what neither of us realised is that since Lee was last in LA, Go Get Em Tiger (which is part of a mini-chain that includes G & B Coffee) had opened a second branch (and is now up to four). It was this second branch I had stumbled open…

The new Go Get Em Tiger (which opened in September last year) occupies the left-hand side of a wooden-built unit, set back and raised a little from the street. Steps lead up to a large terrace which has seating on either side, each arranged around its own tree, a pleasing symmetry which I enjoyed no end.

A square bench runs around the trunk of each tree, while there is another bench along the front and side of both sections of the terrace. There are also a couple of other tables with bar stools. Elsewhere, bar stools are used as tables for those sitting on the benches. Finally, if you don’t like sitting out in the open, or you’ve arrived in LA just as it’s being lashed by the last of a sequence of winter storms with rain of Biblical proportions, there is some sheltered seating outside. A small, recessed area (housing what I take to be the original front doors of the building) sits between Go Get Em Tiger and McConnell’s, directly opposite the stairs. This has two small, round tables, each seating two to three, and providing welcome relief from the rain.

You’ll need to go inside to order and collect your coffee (the food is brought out to you). The front of Go Get Em Tiger is all glass, with the door on the left and a three-part window to the right which can be fully opened, concertina style. This connects the interior with the exterior when it’s warmer. And not raining.

Inside, a long counter dominates the right-hand side, while on the left, starting opposite the espresso machine, is a window-bar with deep, recessed window sills which you can stand at to take your coffee (and eat your food). There’s a pleasingly large gap between the “standing” and the counter, so you don’t feel hassled by people waiting for their coffee.

The counter has a small section facing the window, which houses the cake. Next, down the counter’s long side, comes the till/ordering point (with menus on the wall behind it), then the espresso machine, a modest three-group La Marzocco, with a pair of grinders for the two espresso options. The batch-brew set-up is behind this, up against the wall, with its own EK43 grinder. Finally, a large, open-range kitchen stretches all the way to the back of the store.

Go Get Em Tiger is a multi-roaster, with the likes of 49th Parallel, Heart and Ritual all making an appearance while I was there. Go Get Em Tiger will put on a coffee on and, when it’s gone, move onto the next, usually running through the coffee in a day or so.

I visited on both days I was in Los Angeles. On the first morning, 49th Parallel was on all four options: Ethiopian and Honduran on batch-brew and Buzz Middle School and Epic (both blends) on espresso. I had a cappuccino using the Buzz Middle School, a slightly darker roast than the Epic. This was excellent, a classic cappuccino, very smooth and with distinct chocolate/biscuit notes. The baristas also gave me samples of the two batch-brews and both were excellent, a million miles from my (now out-of-date) stereotypical expectations of batch-brew. The Ethiopian was very smooth, while the Honduran, which I preferred, had a little more body and was a little fruiter, but both were as good as anything I could brew for myself at home.

On my return, the following day, all four coffees were still on, so I tried a shot of the Epic. The staff then felt guilty, putting a new espresso on, Sweet Tooth, a single-origin Ethiopian from Ritual and also brewing a new batch of filter using a Guatemalan from Heart, all of which were very good indeed!

December 2017: Go Get Em Tiger was a runner-up for the 2017 Most Passionate About Coffee Award.

April 2019: You can see what I made of G & B Coffee, which I visited on my return to Los Angeles.