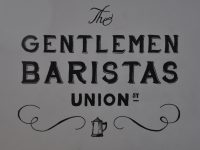 December 2017: The Gentlemen Baristas, Union Street was a runner-up for the 2017 Happiest Staff Award.

December 2019: The Gentlemen Baristas now has nine locations, half of which are clustered around the original on Union Street, although there are some north of the river, including the latest on New Oxford Street in Holborn. It’s also gone back to a mixture of blends and single-origins for its coffee, which is now all roasted in its own in-house roastery in Whitechapel.

5 thoughts on “The Gentlemen Baristas Borough”