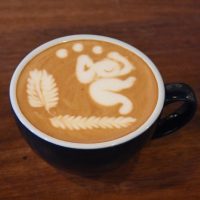 At first, stepping into The Gentlemen Baristas, it was as if nothing had changed. It was only when looking back at the photographs from my original visits in late 2016/early 2017 that I spotted subtle differences. The Faema E71 espresso machine is still there, looking as gorgeous as ever, but the pour-over station at the far end of the counter has gone. The counter itself has had a makeover, generally looking more organised. There are more differences in the cosy back room, with the seating moved around a bit, although the overall ambience remains unchanged.

There have been some changes out front, the solitary bench beneath the window being replaced by a two-person table, while The Gentlemen Baristas has spread out a little, with another two of the tables in front of No. 61 to the left. The other big different is that the second door (on the right) is now in use, although it’s exit only, with the door on the left remaining as the sole entrance.

The biggest changes are upstairs. Turning left at the top of the stairs, you are faced with the familiar choice: left for the upstairs seating, or right for the (not very) secret rooftop garden. When I first visited, The Gentlemen Baristas had been using the upstairs as a training room and the equipment was still there on the left-hand side (over the staircase) as you looked towards the front, with the seating on the right. This has all changed, the training room having long since moved out, an open kitchen in its place, while the seating has also changed, replaced by a neat row of five two-person tables against the wall.

The rooftop garden has undergone a similarly radical transformation. Originally with benches around three sides, it had two large, round tables. Now it has four individual square tables, one for each corner, a move which reflects The Gentlemen Baristas’ transition to a more brunch-orientated spot.

This neatly brings us to the other changes. The Gentlemen Baristas always used to offer a good range of cakes and sandwiches, but these days, this is backed up by a full brunch menu, available from  08:00 – 15:00, Wednesday to Sunday. With hindsight, I’m kicking myself for not trying it, although I did really enjoy my falafel, beetroot and hummus wrap which I had for lunch.

There have been changes to the coffee too, The Gentlemen Baristas now roasting all its own coffee in its East London roastery. The core offering remains the same, with the seasonal Deerstalker blend (typically used for milk-based drinks) alongside the Tophat, a single-origin alternative on espresso. It you want filter, your only choice is batch brew which, during my visit, was being provided by the Tophat, a washed coffee from Santa Luz in Nicaragua.

I played it safe, ordering a flat white, made with the Deerstalker blend which was a 50/50 mix of two washed coffees, a Brazilian and one from El Salvador (since then, the El Salvador has been replaced by a natural Colombian). The Deerstalker combined perfectly with the milk to produce a lovely, smooth flat white. It was like I’d never been away!