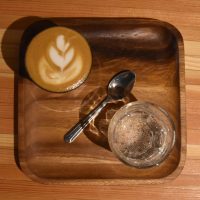 My first speciality coffee experience in Phoenix was the chance discovery of Press Coffee in the Scottsdale Quarter on my very first visit in 2016. Since then, I’ve had a soft spot for Press, visiting its locations on the Waterfront in Old Scottsdale and in the Skywater Apartments in Tempe. The number of Press locations has varied over the years, but currently stands at eight, which includes the new roastery. This opened in July last year in north Phoenix, just off SR51, one on the main routes north out of Phoenix.

Although I have a soft spot for Press, I would be hard-pressed to describe its locations as anything other than utilitarian. Not The Roastery, however, which is magnificent, occupying a standalone building with a large outdoor seating area, a mezzanine level above the counter/kitchen and the roastery at the back.

The coffee offering is very familiar: the Twitch blend, single-origin and decaf on espresso, two options on batch brew and up to six single-origins on pour-over through the Kalita Wave. Add to that a selection of tea, beer, wine and spirits, plus a concise all-day food menu and a range of cakes, and you have something for (almost) everyone.

The Roastery is southeast of the intersection of Shea Boulevard/32nd Street, where Shea has its junction with SR51. It occupies a large, sleek, modern, standalone glass and steel building. Although about three storeys high, it’s open to the ceiling inside and is almost as tall as it is wide, and twice as long. Set back slightly from the busy road, it faces west (32nd Street), while there’s parking down either side and at the back.

There are three entrances: one via a sliding door/window at the back of the outdoor seating area, one halfway down on the right, and the other at the front, left-hand corner, which I’m calling the front door. I arrived at dusk for both my visits, so didn’t try the outside seating, which runs the full width of The Roastery, under a tall lattice structure extending from the front of the building. There are two rows of two-person tables, another to the left, and a pair of rocking chairs in the corner.

Inside, the counter is at the front, set back slightly and occupying maybe 80% of the building’s width, starting at the left-hand wall. The enclosed kitchen is behind the counter, while the mezzanine is directly above. Starting at the left, where the door deposits you, are the cakes, along with the batch brew choices, with the menu written along a girder above the counter. Next comes the till, pour-over and, finally, a customised Synesso espresso machine with its three grinders.

The downstairs seating is arranged in an L along the front and down the right-hand side. A row of four two-person tables (left) and a single eight-person communal table (right) occupy the space between the counter and front wall, together spanning the width of the counter. Opposite the counter, are the retail shelves next to the door to the outside seating.

A seven-person counter runs down the right-side of the kitchen, tucked in under the mezzanine, while the remaining downstairs seating is along the windows on the right, starting with a two-person table in the front corner. Next is the takeaway station, then a seven-person window-bar opposite the counter, followed by four two-person tables, ending at the side door. Beyond this is the realm of the roastery, where Press has its three production roasters (all Probats of varying sizes).

The stairs to the mezzanine start at the end of the counter, opposite the side door, and lead to the back, left-hand corner of the almost square mezzanine. Three of the four sides are open, while on the left there’s a counter against the wall, with a two-group Synesso (which, I suspect, is used for events).

There’s seating around the edges, with three two-person tables along the front and back, plus two along the right-hand side. Low coffee tables, each with a pair of armchairs, occupy the front and back corners, while there’s another two-person table at the top of the stairs. Another low coffee table occupies the middle, surrounded by four armchairs, while a long, tall, 10-person communal table for laptop users sits in front of the counter.

I visited on consecutive evenings, having a 12oz Kalita Wave of the Guatemala del Florida and a cortado, made with the single-origin (a Colombian La Esperanza, as recommended by my barista). My pour-over was a smooth, subtle coffee, served in a classic black cup, which I paired with the quesadillas, which were excellent, although the sauce (fortunately in separate dish) was a little too spicy for me.

My cortado came in a glass, presented on a small, square tray, a glass of sparkling water on the side (there’s a choice of sparkling or still). Coffee and milk went very well together, with biscuit notes and a very smooth finish. I paired this with a generously-sized half order of the avocado toast, which tasted absolutely stunning, with some lovely avocado on a crunchy slice of granary toast.

4 thoughts on “Press Coffee, The Roastery”