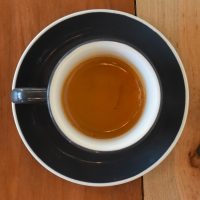 On my last visit to San Jose, in April 2019, B2 Coffee was a fixture in the San Pedro Square Market. However, like so much in San Jose speciality coffee since then, everything has changed, while at the same time feeling much the same. B2 Coffee has, sadly, closed, but, with pleasing symmetry, Voyager Craft Coffee, which took over from the original Bellano Coffee (B1 Coffee if you like) on Stevens Creek Boulevard, has now taken over from B2 as well.

The basic set-up is almost identical, Voyager occupying the same U-shaped counter located on one side of a large, communal seating area at the market’s northern end. You order here and find a seat (or sofa) in the communal area, or, alternatively, head outside, where there’s even more seating.

The coffee is all roasted in-house by Voyager, with seasonal offerings on espresso (Cascade blend, single-origin and decaf), batch brew and with up to five choices on pour-over. Add to that Voyager’s unique destination drinks, their ingredients inspired by places around the globe. If you’re hungry, there’s a concise toast-based menu, a selection of cakes, plus the food hall in the market is at your disposal. And there’s a bar!

Regular readers know that I love Coffee Spots in Markets, so it’s no surprise that I really liked both B2 Coffee and now, in its place, Voyager Craft Coffee. The San Pedro Square Market is at the north western edge of San Jose’s compact downtown, on the corner of San Pedro and Saint John Streets. The market has a large, open-air seating area at its northern end. A row of tables, shaded by large umbrellas, is next to the pavement, followed by more tables in the middle. Finally, in the shade of the building itself, are several sets of comfy chairs/sofas.

Three massive roll-up windows puncture the front of the market, with large, glass double doors at either end. These lead into a large, open communal sitting area, where you’ll find Voyager Craft Coffee, tucked away on a stand-alone counter in a niche to the left, its own entrance down the side of the market on San Pedro Street. Outside is a small, semi-enclosed seating area, shaded by more umbrellas.

The communal seating area, with its amazing, high ceiling, is flooded by light from the windows along the front, which are joined by two more down the side by Voyager. On the far side, running the width of the right-hand wall, is a long bar, with the communal seating in the middle. There’s a choice of comfy chairs, massive sofas, communal tables and small tables. An opening in the back wall on the right leads into an L-shaped food hall, lined with various eateries. This also has a separate entrance on San Pedro Street, just a little further down from Voyager.

Entering by the side door brings you to the back of the left-hand side of the counter, which you need to follow along to the till. Alternatively, entering through the front (the northern end of the market) you’re faced by the short end of the counter, where you’ll find the cakes, temptingly displayed in a glass case. From here, head to the left to find the till. The menu hangs above the counter, while the pour-over options are on a printed card on the counter-top.

When I visited the original Voyager Craft Coffee in April last year, it had just started roasting its own single-origins. These days, the transition is complete, with Voyager roasting all the coffee, including blends and decaf. During my visit, the Cascade blend was on espresso, along with a Finca Las Ventanas from Costa Rica and a Zambian decaf. These were also available on pour-over through the Silverton dripper, joined by a Guatemalan Huehuetenango and a Limmu Kossa from Ethiopia. The batch brew, meanwhile, is usually the Cascade blend, although sometimes there’s a single-origin instead (which was the case during my visit: the Guatemalan Huehuetenango).

I began with a cortado, served in a glass, the Cascade blend going very well with the milk to form a sweet drink with a pleasing hint of the coffee’s fruitiness coming through. I paired this with the avocado toast for breakfast, a single, large slice of toast loaded with smashed avocado, which was perfect. Before leaving, I had a shot of the Costa Rica Finca Las Ventanas. This was excellent, a well-balanced, smooth espresso, served with a glass of sparkling water, which set me up nicely for the day.