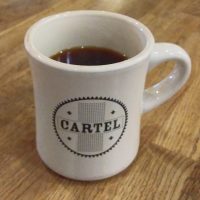 It’s fitting that I celebrate my return to Phoenix with a long overdue write up of Cartel Coffee Lab in Scottsdale. Cartel, a small roaster/coffee shop chain with its flagship roastery/coffee shop in Tempe, has been going for almost 11 years. It now has seven branches, including downtown Phoenix and at Sky Harbor airport, as well as two branches in Tucson, and another in Palm Springs over the border in California. The Scottsdale branch has been going since 2011 and I visited three times last year, never managing to write it up for a variety of reasons (usually a lack of decent photo opportunities, since it’s perpetually busy).

Scottsdale is similar to all the other branches when it comes to coffee, serving six seasonal single-origins, all roasted in-house, one of which is decaf. Naturally, all the beans are available to buy. One (the top of the list) is always available as espresso, while there’s also a daily bulk-brew, with all the beans available as pour-over through the Chemex (8oz or 16oz), Cartel having stopped offering Aeropress/V60 at the end of 2018. There’s a range of cakes if you’re hungry and, in this branch, craft beer and Arizona wine on tap.

Cartel Coffee Lab is at the northern end of Od Scottsdale, on East 5th Avenue, just southeast of the pedestrian bridge over the Arizona canal. In a long line of single-storey shop units on the northern side of the street and set back under a veranda running along all the shops, it rubs shoulders with an eclectic mix, including a tattoo parlour and multiple souvenir shops. The relatively simple store-front has a single, wide floor-to-ceiling window, flanked by a door to the left, and a door-shaped window to the right.

There’s a single, long bench in front of the window if you wish to sit outside, although there’s more “outside” seating to the left, where a wide, covered passageway runs between Cartel and its neighbour, Giving Bracelets. A long bench runs down the Cartel side of the passageway, with six two-person tables, followed by a door into Cartel. The passageway continues, with a two-person table beyond the door on the right, then, on the left, a long, padded bench that wraps around the corner, with a long, low coffee table. Finally, on the right, another door leads into Cartel’s back room (more of which later).

A four-person window-bar with high bar-chairs occupies the front window to the right of the door, while three communal tables on the right occupying the space between window and counter. The first, the largest/widest of the three, seats eight, running widthways across the store. Behind that, two narrower, six-person tables run lengthways, one in the middle, the other close to the right-hand wall.

There’s a bar immediately to the left of the door from the passageway. You can get wine/beer on tap, plus there are three high bar chairs. The counter is next, occupying the width of Cartel, the till and coffee options on the left, cakes in the centre, and two-group La Marzocco Strada on the right. On the right-hand wall, just in front of the counter, is a small set of retail shelves.

The back room is visible through an opening in the wall behind the counter, although the only way in is via the passageway. This is a cosy space with a pair of sofas, one against the right-hand wall, the other against the back wall. There are a pair of two-person tables along the front wall, while another two run along the left-hand wall, which consists of windows looking onto the passageway.

On my first visit, just under a year ago in February 2018, I had an Aeropress of a Colombian recommended by the barista. Served in a mug, this was a slightly acidic coffee that held its own as it cooled. I paired this with a lemon & poppyseed muffin that had a rich, cake-like interior and crisp exterior.

I popped back a week later, just before I left Phoenix at the end of my trip, to buy a bag of the San Agustin, a naturally-processed El Salvador. This came with a free cup of batch-brew (“drip” on the menu), which was the same coffee, a neat coincidence. A juicy, full-bodied brew, the flavours really matured as it cooled. While I was there, I got chatting with David, a local student, who let me try his pour-over, a washed Kenyan which was very clean, very smooth and very unlike a typical Kenyan.

I popped back one evening on my return to Phoenix in March, when Cartel was celebrating its 10th Anniversary. I marked the occasion with an excellent decaf cortado, paired with a chocolate-chip scone (American, not UK).

Finally, I called in on Saturday on my latest trip to Phoenix, selecting the One & One, a split shot espresso and piccolo, made using the Finca Gamboa, a washed Costa Rican coffee. This was beautifully presented on a ceramic tray, served with a glass of sparkling water. The coffee was very fruity in the cup, which came through in the espresso, particularly on the first sip, after which it became smoother. In milk, it was just as good, the coffee going well with the milk to produce a smooth, rich taste. The perfect way to celebrate my return to Phoenix!

You can see what I made of all the other branches of Cartel Coffee Lab that I’ve visited. Also, if you liked this, then don’t forget to check out the Coffee Spot Guide to Phoenix for more great Coffee Spots.