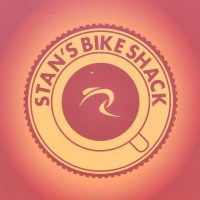 Stan’s Bike Shack has been on my radar for almost all of its 4½ years of existence. Between the villages of Partridge Green and Bines Green in West Sussex, it’s on the Downs Link, a 37 mile cycle route from St Martha’s Hill, near my home in Guildford, to Shoreham-by-Sea on the south coast. Heading south, Stan’s Bike Shed is about ⅔ of the way along, slightly too far for me to walk in a day, which might explain why it’s taken me so long to visit.

Stan’s Bike Shack is one of those places where the name pretty much says it all. It’s a shack (and a very nice one at that) located just off the road linking the two villages, which welcomes cyclists and walkers. It serves Craft House Coffee on espresso and batch-brew, with all-day breakfasts, sandwiches and cake, all prepared in the open kitchen behind the counter.

October 2020: Sadly Stan’s Bike Shack has had to close due to the expiry of the lease. It’s last day was on 27th September, although the team hope to be back in another guise at some point in the future.

If you’re cycling/hiking the Downs Link, stopping at Stan’s Bike Shack is pretty much obligatory. Other than that, getting there will be your biggest problem since the Shack is geared towards cyclists and walkers, with no on-site parking. If you are driving, your best option is to park in the village (Partridge Green) and take the 10-minute walk south.

Stan’s Bike Shack is well-signposted, at the start of a private lane on the left-hand side of the road. Turing right, you enter a large yard/paddock, with the Shack at the back on the left. There’s a large, outdoor seating area to your left, with four large, wooden picnic tables and two smaller, square metal tables. Next comes the shack itself, a single-roomed rectangular building with an open, A-frame roof, short side facing forwards, with the door near the front along the long side on the right.

There are another three square, metal tables on a paved area alongside the shack plus three garden benches opposite it against the boundary hedge. Naturally, there’s ample bike parking, as well as spare locks and a handy pump.

When it comes to coffee, Stan’s Bike Shack uses nearby Craft House Coffee, with a bespoke Brazil/Colombian blend on espresso and a single-origin (a Brazilian during my visit) on batch-brew. There’s an all-day breakfast menu (consisting of items such as egg & bacon baps) as well as a range of sandwiches on ciabatta rolls or brown/white bread. All the food is prepared in the kitchen behind the right-hand side of the counter, where you’ll also find the cake and the till (both on the counter).

Meanwhile, off to the left, on a little counter of his own, you’ll find Stan behind the two-group La Marzocco Linea espresso machine. Except his name’s Steve, Stan being a nickname from his youth. Stan’s Bike Shack combines Steve’s twin passions of coffee and cycling with his third, music, the shack hosting gigs on occasional evenings, when up to 40 people can squeeze in!

I stopped off at Stan’s Bike Shack one Saturday morning for some coffee and a second breakfast on my way to Brighton & Hove. I had an egg roll (fried egg on a wholemeal bap) which was perfect, while the coffee came strongly through the milk in my flat white. It had quite a strong kick to it at first, but mellowed thereafter.

I was extremely glad to have finally visited Stan’s Bike Shack. Hopefully it won’t be another 4½ years before my next visit!

December 2019: Stan’s Bike Shack was a runner-up for the 2019 Most Unlikely Place to Find a Coffee Spot Award.