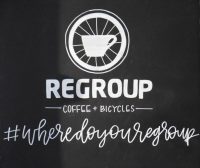 The pairing of coffee and bicycles is a fairly well-established in the UK, but not one I’ve seen very often in the US. To that end, Regroup Coffee + Bicycles, which does what it says in the name, is, dare I say it, much more European in feel than it is American. Forming the easternmost point of a diamond of speciality coffee shops that includes Cartel, Berdena’s and Fourtillfour in the heart of old Scottsdale (just to the east of Phoenix) it’s a relative newcomer, having only opened at the end of 2016. That said, Regroup has been very successful, so much so that it’s planning to open its own roastery/coffee shop, also in Scottsdale.

Occupying a low, single-storey building, Regroup’s layout is pretty simple, with the coffee shop in the front and bicycles at the back. The coffee menu is just as simple, with a blend on espresso (from Colorado’s Hotbox during my visit). I have to say, though, that my heart skipped a beat when I saw the sleek lines of the Slayer espresso machine on the counter. There’s also the obligatory bulk-brew available, while if you’re hungry, Regroup has a limited selection of things on toast, plus a range of cakes, pastries and fruit.

January 2020: I popped back to Regroup where I learnt that the roastery had been slightly delayed and was due to open at the end of the month in Tempe. There’s also a brand new Mk II Slayer on the counter. The only other change is that Regroup has gone cashless.

Located on the eastern side of North Brown Avenue in Scottsdale, Regroup Coffee + Bicycles occupies a low single-storey building that’s maybe three times as deep as it is wide, with the interior split fairly equally, space-wise, between the coffee shop at the front, and the bicycle shop at the back. The front in punctured by three large, tall windows, with three tables outside, one per window, each with a pair of chairs. The wide street, coupled with low buildings on either side, means that the front of Regroup really catches the sun, especially in the late morning and afternoon.

If you want to go inside, the door is off to the right, at the side of the building. These deposits you next the four-person window-bar, complete with stools, which runs along the front of Regroup, while the coffee shop itself spreads out to your right. The layout is very simple, with the counter, a white-tiled affair, on the left. Opposite it, a long bench runs along the right-hand wall. It has three two-person tables, with a solitary four-person table in the middle. A nice feature is that there is power at all the tables, including USB sockets, the only exception being the four-person table.

The simplicity continues with the counter itself. The Slayer espresso machine faces into the main space, with the grinders to the counter’s left, facing the windows at the front. There’s a display case for the cakes, which you have to file past to get to the till on the right. The concise espresso menu, meanwhile, is on the back wall, featuring espresso, Americano, Macchiato, Cortado, Cappuccino, Latte and Mocha. Refreshingly, there are no buckets of milk here. If you’re in a hurry, there’s the obligatory bulk-brew plus cold brew.

During my visit, the roaster was Hotbox from Colorado, with an espresso blend consisting of 15% Ethiopian and 85% Colombian. At my barista’s recommend, I had a cappuccino, the coffee going extremely well in the milk, with classic chocolate and biscuit notes. My cappuccino was served with a glass of water and, in another refreshing change from the dominant American model, it was brought to my table. Coupled with a quiet, relaxed atmosphere, Regroup is the perfect spot to enjoy your coffee.

Despite having been open for less than two years, Regroup has grand plans. There’s another standalone coffee shop on the cards, which will double as a roastery, with Regroup moving to roast all its own coffee. While I was there in February, the roaster, a state-of-the-art Loring, had just been delivered, and the plan was to open in April, annoyingly just after my return visit to Phoenix in March. Oh well, I guess I’ll just have to come back. Again.

If you liked this, then don’t forget to check out the Coffee Spot Guide to Phoenix for more great Coffee Spots.