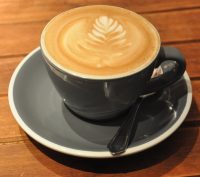 Nkora is a relatively recent addition to London’s speciality coffee scene, joining the ever-growing crowd in and around the coffee hub of Shoreditch. A cosy spot, it’s bigger than it looks. Although the upstairs is small, with just a window-bar and a few tables, there is also a small back yard and, even better, a basement! This opened a couple of months ago and has two pairs of armchairs, plus a large, communal table.

With a small breakfast/lunch menu and an interesting selection of cake, Nkora’s focus is firmly on the coffee. The main roaster is Union Hand-roasted, which supplies the house-espresso, a single-origin Xejuyu from Guatemala. This is joined on filter by two or three single-origins, usually from Union and a guest roaster. These are available through either the V60 or Aeropress.

That I visited Nkora is largely down to Alexandra (aka AKBoogie on social media) who suggested it and joined me for coffee. Alexandra is perhaps best known (by me, at least!) for her ambitious 365 London Cafés project. You can follow her adventures on twitter and Instagram as she visits a (London) café every day over the period of a year. I told you it was ambitious!

Nkora, which opened at the end of 2015, is at the southern end of Hackney Road on the northern fringes of Shoreditch. It’s on the northern side of the road, in a small parade of shops. There’s a bench outside on the pavement, underneath a generous window, while the door’s to the left. Stepping inside, the counter is directly ahead of you, with a small table between the door and the counter, above which is the coffee menu on the wall to your left. To your right, a four-person bar occupies the window.

The counter dominates the upstairs, occupying most of the left-hand side. The cakes, which are largely made by the owners, face you as enter, with the till on the corner and espresso machine on the long side, which runs all the way to the back of the store. There’s just enough space down the right-hand side, between the counter and the wall, for three small, two-person tables.

If you can’t get a seat, don’t despair. Head to the back of Nkora and you’ll find that there’s a door which leads to a small back yard where there’s more seating (although you might have to wait for the weather to improve before it’s open!). Even better, a set of stairs to the right leads down to the basement, which was opened towards the end of last year.

Heading down, there is small, ante-chamber like area at the bottom of the stairs (underneath the front window) which houses a pair of armchairs against the front wall and a set of retail shelves opposite them. Doubling back on yourself, past the retail shelves, you’ll find the basement proper, a small room with a single, six-person table on the left and another pair of even more comfortable armchairs on the right (which Alexandra and I nabbed, having the entire basement to ourselves). Although there are windows front and back, there’s not a lot of natural light, particularly not on the gloomy day we were there, so the white-painted walls and multiple spot-lights were very welcome.

Named after the Nkora washing station in Rwanda, Nkora is very much focused on speciality coffee and, unusually, has a single-origin on espresso, a Guatemalan, which stays on all year round. We decided to try this out, me via a flat white, while Alexandra went for an oat milk cappuccino. Alexandra paired this with a tomato, mozzarella and pesto toasty which disappeared very quickly, while I had a slice of honey and walnut cake, which was excellent. Moist and filling, it had a complex array of tastes and wasn’t too sweet, making an excellent second lunch after the slice of mandarin cake I’d had earlier in the day at London Grind.

We both enjoyed our coffee, which I felt went very well in milk, creating a smooth, well-balanced drink. I was particularly impressed with the latte art, which lasted all the way to the bottom of the cup.

Unfortunately, Alexandra had to scoot off back to work, but after she’d gone, I had a chance to chat with Joe, the manager, a very friendly fellow who took all the photographs that grace the walls of Nkora. He also told me that there were plans afoot to do more with the basement, so watch this space!

December 2017: Nkora was a runner-up for the 2017 Coffee Spot with the Best Basement Award.