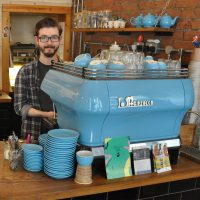 I first wrote about Small St Espresso at the start of 2013, at which point it was at the centre of Bristol’s growing speciality coffee scene, which included (the now closed) Wild at Heart and (the yet to be opened) Full Court Press over on Broad Street. These days, the centre has expanded to include the likes of Playground Coffee and the newly-opened Tincan Coffee Co.

This is actually my second update on Small St Espresso, which featured as the first Coffee Spot Update, published in June 2013. One of many excellent things about Small St Espresso is that it’s on Small Street (other street-named coffee shops take note!). It’s just as well that it wasn’t so named because it’s small, since, after the latest changes which prompted the latest update, I might have to start referring to it as not-so-Small Street espresso…

Yes, that’s right, Small St Espresso has had an extension. Although this hasn’t increased the physical space that much, it’s almost doubled the (admittedly limited) seating, but fortunately without changing the essential character of the place which makes Small Street so special. Talking of expansion, Small St has also opened a second branch, the lovely Little Victories.

You can read about the changes after the gallery.

At first sight, nothing much seems to have changed about Small St Espresso, although the eagle-eyed will notice that the premises to the right is different… However, it’s when you step inside that you realise something is up. Yes, the beautifully-tiled counter is still there at the back. Yes, the cleverly-fitted wooden benches in the windows either side of the door are still there. And yes, the excellent coffee is still excellent, with the house-blend from Clifton Coffee Roasters still joined by guest roasters from around country taking their turn in the second hopper. But have a look at the right-hand wall. Now that wasn’t there before. Or more precisely, it was, but now isn’t… It all happened like this…

Once-upon-a-time, there was a bank next door to Small St Espresso, but in 2015, it upped sticks and left. The space immediately to Small St’s right contained a cash machine and, as it turned out, the space itself was part of Small St’s premises. However, long ago, the space had been leased to the bank. Now, with the bank gone, the landlord wondered if Small St might like to use it, perhaps as a cupboard (storage space being at a bit of a premium). However, Small St had other ideas and, on further investigation, realised that it would make the perfect extension, if only the party wall was knocked through. So that’s what happened…

The result is a lovely new space, the alcove, accessed through a literal hole in the right-hand wall. Some effort has been made to smarten up the brick work, but essentially it does look as if someone knocked a hole in the wall. Which they did. There’s a new window at the front and the alcove, which is perhaps a third of the width of the original Small St, runs maybe two-thirds of the depth of Small St.

Inside, the new right-hand wall is plastered, while there is a gorgeous brick-vaulted ceiling, with a central ceiling beam running from left-to-right separating two shallow arches. The alcove shares the same wooden floorboards as the main space, but is a little bit higher, accessible via a small step. The seating also matches that in the original body of the shop, with a bench running along the length of the right-hand wall. There’s a two-person table at the back and a larger, four-person table in the window at the front, both with their own benches against the party wall.

Other than that, nothing much has changed, Small St retaining the same intimate character and excellent coffee that made it such a hit in the first place. It’s just now even more people can enjoy it at the same time.

December 2017: Small St Espresso was a runner-up for the 2017 Best Physical Space Award.

If you enjoyed this Coffee Spot, then take a look at the rest of Bristol’s speciality coffee scene with the Coffee Spot Guide to Bristol.