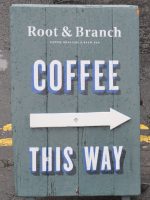 Belfast has a varied speciality coffee scene, although one of the main trends I noticed during my visit in March was the tendency for coffee shops to occupy relatively large spaces, with an emphasis as much on food as on the coffee. However, firmly bucking that trend is today’s Coffee Spot, Root & Branch.

A roaster as well as espresso/brew bar just off the busy Ormeau Road, Root & Branch is tiny, with a covered courtyard that’s bigger than the shop and with more seating on the pavement than it has inside, where it’s standing-room only! However, don’t let that put you off, since there’s also a cosy upstairs, where there’s a pair of chairs and a few stools.

Despite the lack of room, Root & Branch has miraculously managed to fit in a 6kg Giesen coffee roaster in the corner, which turns out all the coffee, including the Saints & Scholars seasonal espresso blend. This is joined by a single-origin on the second grinder, while pour-over fans won’t be disappointed, with three more single-origins available through either Kalita Wave or Aeropress, depending on the particular bean. There’s also a small selection of delicious cake to go with your coffee.

Belfast’s a city where coffee shops tend to cluster together, with one of the main clusters along the Ormeau Road, south of the centre. Towards the southern end, if you’re paying attention, you’ll find a sign directing you down Jameson Street, where you’ll find a pair of lovely, old brick-built buildings, the space between them occupied by a pair of wooden gates. The giveaway, other than the words “Coffee Roasters” painted on the gable end of the second of the two buildings, are the tables outside on the pavement, although if you’re around on a Sunday, the sound of live music will probably draw you in.

There’s one table to the left of the gates, with two to the right, both sheltered by projecting canopies. Although the street is quiet enough, when I was there, it was raining so hard that not even the hardy natives were foolish enough to sit outside. Instead, head through the gates and into the small, covered courtyard with its whitewashed brick walls on three sides.

You can sit on a pair of benches against the right-hand wall. These were made using old PE racks from a local primary school and furnished with coffee tables made from the trunk of a fallen beech tree. As well as being under cover (the courtyard has a glass roof), you’re away from the street, plus there’s a great view across the courtyard to Root & Branch proper.

This occupies a narrow, two-storey building, gable-end facing the street. The wall facing the courtyard is dominated by a glass door which opens to the right, concertina style, so when it’s not too cold, it forms a continuous space with the courtyard. Stepping inside, the single room is dominated by the counter on the back wall, facing the courtyard. Here you’ll either find Ben, the barista, or Simon, who roasts all the coffee and who also takes shifts behind the counter. If you’re lucky, you’ll find both of them, particularly if it’s one of the two weekly production days.

As a space, it reminded me of the much-missed I Am Coffee in New York City, although it’s not as tall. However, while I Am Coffee was just a counter, Root & Branch has a flight of stairs leading off to the right and, amazingly, tucked in the back corner by the stairs, a Giesen roaster!

If you want to be inside and you want a seat, head upstairs, where the space doubles as seating and a classroom, with Root & Branch running popular home barista classes here on Thursday evenings, while Simon also uses it as a laboratory space. There’s a two-person bar at the back, overlooking the stairs, while to the left is a solitary window overlooking the courtyard, flanked by a pair of armchairs. Finally, at the back, there’s another bar/counter with another pair of stools. In keeping with the upcycling theme of the courtyard, the bar/counters are made from the packing case used to ship the roaster from Holland!

While I was there, Simon treated me to the single-origin espresso, a natural El Salvador which was quite acidic and a little sharp for my tastes. However, this is very much in keeping with the Root & Branch roasting philosophy, which is very light. Simon also made me a Kalita Wave of an Ethiopian Yirgacheffe single-origin, which, unusually for the region, was another natural coffee. This was a really fruity, full-bodied coffee, again, not your typical Yirgacheffe, although very much to my tastes. Simon paired this with an excellent salted caramel pecan brownie which really complimented the coffee. Wonderful!