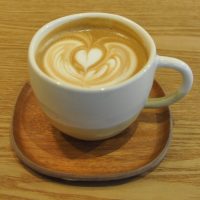 I am indebted to Caffeine Magazine for the heads-up on Kurasu (which featured in Issue 26), since it’s not somewhere you’re likely to stumble upon by accident. Located in a cluster of small, quiet streets west of the railway station, it makes a perfect first (or last) stop if you’re travelling to the city by train. It’s a modest spot on a corner, the long side running along a pedestrian alley, with a small shop front facing onto the main street.

This is dominated by a single window, with a sliding glass door embedded on the left. Inside, it is equally simple, with the counter, running along the right-hand wall, occupying at least half the space, although it stops just short of the window at the front and the back wall, leaving space for retail shelves (coffee, at the front, on the right-hand wall; equipment, on the back wall). As well as the window at the front, there’s another along the left-hand wall, running almost half its length.

This is where you’ll also find the seating, such as it is. There’s a small, standing-only bar immediately to the left of the door, extending a little over the window, then, at the back, is a four-person bar with long, narrow stools. Finally, at the far end of the counter, is a single seat, perhaps the best spot in the whole place, where you can sit and watch the baristas at work.

As well as championing Japanese-designed coffee equipment (check out the wide range of pour-over filters at the back), Kurasu showcases Japanese roasters, which it features on pour-over (V60) and batch-brew (Moccamaster) alongside its house-blend, Reservoir, on espresso. During my visit last year, there were four single-origins available on pour-over from two roasters, Manly Coffee, from Fukuoka, and Morifuji Coffee, from Kanagawa, with a fifth single-origin from Morifuji on batch-brew.

Faced with all that choice, I went for a cappuccino with the house-blend and was rewarded with a very rich, creamy coffee, the milk going extremely well with the coffee, but allowing its natural flavours to come through. It was also extremely well-steamed, the milk holding the latte art to the bottom of the cup.

Although not specific to Kurasu, one thing I learnt on this trip is that, unlike the UK/US, where the barista will place your coffee on the counter for you to pick up, Japanese baristas are incredibly polite and will therefore hand you your coffee. Which, when you’re standing there, camera in hand, ready to take a picture of it, can be tricky. By the end of the trip, I’d learnt enough to put my camera down, politely take my coffee, then take a picture of it!