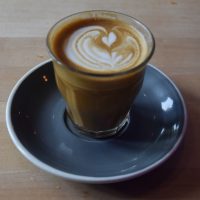 As you may have guessed from the gallery (particularly if you’ve viewed my original Café Plume gallery) I was relieved to find that very little had changed, Paquebot Mont-Royal retaining almost all of Café Plume’s look, feel and atmosphere. Other than the change of roaster (Café Plume used Verve) and an upgrade to the grinders, probably the biggest difference is the laptop policy, Paquebot taking out the power sockets and restricting laptop use to the window-bar. Indeed, the look and feel is sufficiently similar that the following description is pretty much taken from my original write-up of Café Plume.

Seven two-person square tables line a padded bench running down the right-hand wall opposite the counter, while a row of four square two-/three-tables runs down the middle. Finally, a window-bar with chairs starts to the right of the door, matching the contours of the bay window.

There’s plenty of natural light, complimented by multiple unshaded lightbulbs hanging from the ceiling. This blends with the natural materials of the interior: wooden tables, counter and floor, with an exposed brick wall on the right. There’s also plenty of greenery in the shape of house-plants dotted around the place. There’s also music, played from the coffee shop’s vinyl collection which is housed at the far end of the counter. The baristas get to choose which record goes on the turntable, the LP sleeve displayed on a noticeboard so you can see what’s playing. While I was there, it was classic early 70s David Bowie, which I approve of whole-heartedly!

All the coffee is from Zab, which has recently merged with Paquebot. There are two single-origins on espresso and one on batch-brew. The first of these, the Jesmiar Sandi from Brazil, is always on espresso, while the others change weekly. I had a lovely flat white, a proper, 6oz one, served in a glass and made with the Waykan single-origin from Guatemala. This went very well with the milk and was the perfect start to my day.

Like Café Plume before it, Paquebot serves toasted sandwiches and wraps, but I didn’t fancy one of these for breakfast, so had a very tasty pain au chocolate with orange zest instead. Afterwards, I got chatting with my two baristas, Pamela and Frédérique, who were very warm, welcoming, helpful and friendly.

Pamela poured me samples of three cold drinks which Paquebot has on tap: nitro cold brew, kombucha and the house special, café lemonade. The cold brew was, I’m sure, very fine, but not to my taste, while the kombucha was pretty tasty. However, the café lemonade, made with Ethiopian cold brew and homemade lemonade, was awesome and incredibly refreshing, something I could drink all day.

As an added bonus, David, the owner of Café Plume, who I had met 5½ years ago, came into Paquebot while I was there. He explained that he had sold Café Plume last year so that he could pursue some more creative projects, but that he wanted to sell to someone who would maintain Café Plume’s spirit. When he was approached by Paquebot, he knew that they were the right people to take Café Plume over and, you know what? He was right! Paquebot Mont-Royal is every bit as lovely.