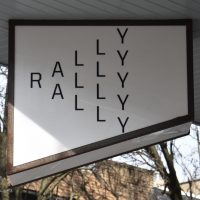 In what seems to be a Philadelphia trend, Rally is another coffee shop on a corner, in this case Bainbridge and South 7th Streets, occupying the ground floor of a long, rectangular three-storey building. The long side runs along Bainbridge, while the short side faces South 7th. The door, however, shows no favouritism, sitting on the corner at 45° to both.

Inside, Rally is long and thin, with the counter running along the right-hand wall, set back slightly from the front wall, while the seating is on the left. The (short) front wall has a single large bay window, while the left-hand wall is punctuated by three tall, thin French windows with a solitary thin window at the back. During warm weather (ie not early March), Rally opens the French windows to connect to the pavement outside, where extra tables are put out.

Inside, rows of two-person tables line the windows. There’s a solitary two-person table immediately to the left of the door, followed by a second solitary table, and then three further rows, each with a pair of two-person tables. Finally there’s a six-person communal table at the back with a screen to the right, giving it a little bit of privacy. In a neat move, you can pay by the hour to reserve one of the small tables (or the communal table) if you want to guarantee a seat (if, for example, you are using Rally as an office for the day or want to hold a meeting). This neatly solves the problem of laptop users hogging a table. In an extension of this, you can hire the whole space if you really want to.

The counter occupies the front half of the right-hand side, leaving a small gap to the bay window, with some retail shelves on the wall between counter and window. The cakes face front, with the till just around the corner, diagonally opposite the door. Then comes the La Marzocco Linea and its grinder, after which you collect your coffee. The counter continues, although here it’s just seating, with four comfortable saddle-top stools. After that, there’s a minimalist set of retail shelves on the wall beyond the counter. Unusually for a coffee shop, the merchandising is mostly design-related material rather than coffee things. In this respect is reminds me of places Coffeewerk + Press and The Cow & Co Cafe, but on a smaller scale.

When I visited in 2018, Rally was using Passenger Coffee Roasting with a seasonal blend (Stowaway) on espresso, the obligatory batch-brew and a single-origin via the Clever Dripper. This is still something of a rarity in America and, in March 2018, was a relatively new innovation for Rally. Charlie, the barista, wanted to offer something different, with a new single-origin every month.

Having spent all day drinking espresso-based drinks, I went with the Clever, pairing my coffee with a rather tasty almond croissant. The coffee itself was a Bokasso, a washed Ethiopian from Sidamo, served, as it should be, in carafe with a cup on the side. It started out as a very smooth, well-balanced coffee, but the flavour kept evolving as it cooled, coming through much more strongly when cool. In fact, I enjoyed it more and more, so by the time it was cold, it was awesome!