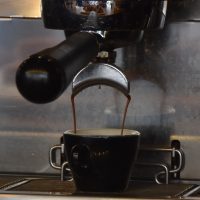 Over the seven years I’ve been writing the Coffee Spot, I’ve seen speciality coffee spread from a handful of city centres to all sorts of interesting places. One of the most exciting is seeing speciality coffee appearing at major sporting events, in particular, at Lord’s, the home of cricket, where I’ve been going each summer for over 20 years.

It all started in 2011 when Kaffeine were asked to make coffee in the Harris Gardens behind the pavilion. It’s been slow going since that promising start, but last year, I noticed a change. Suddenly there were numerous speciality coffee outlets around the ground, with the likes of  Browns of Brockley and the Ground Coffee Society leading the way. There was even an in-house coffee shop, Portman’s Café, serving Union Hand-roasted!

This year I managed to get tickets for the first ever England vs Ireland Test Match, which took place two weeks ago (although sadly I’ve missed out on tickets for the Ashes Test next weekend, unless anyone has got any spares…). So I popped along to watch some cricket (England won, rather famously) and also brought my HuskeeCup, Therma Cup and Kaffeeform cup, to see what coffee I could find.

Let’s start off with Kaffeine, which is still going strong in the Harris Gardens. I’ve written extensively about Kaffeine at Lord’s, so I won’t say too much. These days, as well as the operation in the Harris Gardens, Kaffeine is serving in the Media Centre and at the top of the Mound Stand. Sadly, both of these are off limits to the general public, so make sure you head over to the Harris Gardens before the start of play for your Kaffeine fix.

The Harris Gardens offers sit-down breakfast and lunch on match-days, with Kaffeine providing the coffee. However, before the start of play, takeaway customers are also welcome, making it an essential first stop when you get into the ground. Once play has started, though, you’re largely on your own, although I find that if you were really nice to the baristas when buying your morning coffee, you could dodge past the waiters at lunchtime for a cheeky flat white. Knowing Peter, Kaffeine’s owner, probably also helps!

The good news is that these days, as well as Kaffeine, there are four other speciality coffee outlets that I’m aware of, all of which are available to the public on major match days (Test Matches, One Day Internationals, T20s, domestic finals and, quite possibly, the domestic 20-20 matches too).

Let’s start with Browns of Brockley, which made its first appearance last year, when its new coffee van had a pitch at the Nursery End, behind the Compton Stand. The good news is that Browns is back for another year, although this time its not allowed to display any logos, etc, so you have to know what you are looking for (the Square Mile logo is the only thing that’s allowed to be displayed, which itself is a guarantee of quality.

The van, which was back in its traditional spot, on the edge of the grass being the Compton Stand, is a thing of beauty. Kitted out with a Victoria Arduino Black Eagle espresso machine (the first one in a mobile coffee set-up, I believe), complete with Mythos 1 grinder for espresso and an EK43 for batch-brew (with Square Mile’s Red Brick on both). There’s also a decent selection of cakes and pastries.

However, the even better news is that this year there aren’t one, but two Browns of Brockley vans. The second one is parked at the other end of the ground, right outside the Harris Gardens in fact, in the spot that was occupied last year by Coffee Space. The set-up is the same, with another Black Eagle in the back of the van, which is ideal since you can stand at the end of the counter and watch your espresso extracting (or is that just me?).

A third option, and another returnee from last year, is Ground Coffee Society, which also had a van at the Nursery End, which I managed to miss last year! This year I wasn’t going to be so remiss and popped along at the end of play. Ground Coffee Society has a slightly smaller van than Browns, but still manages to offer espresso (via a three-group La Marzocco Linea) and batch brew options, plus, when I was there, a selection of brownies. Ground uses its standard Caveman blend on espresso, while there’s a single-origin on batch-brew, a Colombian during my visit.

The final option is Portman’s Café, which opened last year is a permanent fixture under the new Warner Stand. Serving Union Hand-roasted, I believe that this is open on all match-days, both domestic and international, making a great option for county matches.

So, to the coffee. With so much choice, I had to pace myself, but still managed to get around to everyone except Portman’s (and that was only because the game was over by lunchtime). I started, of course, with a flat white from Kaffeine, a lovely, rich, creamy coffee. I followed that up with a visit to the new Browns of Brockley location, where I had an espresso followed by the batch brew (which I missed out on last year), both of which were excellent. Finally, I caught up with Ground Coffee Society for a final flat white, the Caveman blend going very well with milk.

In closing, I’d like to thank Lord’s for continuing to back speciality coffee and would love to see other cricket grounds (and sporting grounds in general) following suit. I also applaud Lord’s for continuing to invest in water fountains (which are everywhere around the ground) and to push recycling wherever possible. It’s come a long, long way in a few short years.