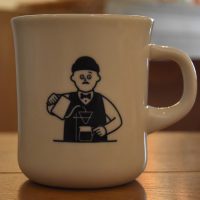 Foret Coffee was the third of the three coffee shops my friend and local guide, Christopher, took me to when I visited Nagano last year, along with Hirano Coffee and Maruyama. When I passed through Nagano earlier this week, with a little bit of time to kill, I decided to pay Foret another visit, having enjoyed it so much last time (I would have revisited Hirano as well, but it closes on Tuesdays, the day I was there).

Foret is very much in the third-wave mould, a coffee shop/roaster (the coffee is roasted off-site) with a simple shop, occupying a sparsely-decorated concrete shell, with the counter on the right and the seating on the left. Unusually for Japan, it also caters to the takeaway market, with a separate takeaway window at the front of the counter, so you can get your coffee to go without setting foot inside.

Foret has a simple espresso-based menu using a seasonal espresso-blend, while if you want filter, there’s a wide selection of single-origins to choose from, conveniently segregated into light/medium roasts and dark roasts. If you’re hungry, there’s a small selection of scones and cookies, all baked on the open range behind the counter.

You can read more of my thoughts after the gallery (all photos from my 2018 visit unless noted).

Foret Coffee has been roasting since 2014, but the coffee shop only opened in June 2018, so it was very new when I first visited. On Chuo-dori, heading north from the station in the direction of the Zenkō-ji temple, it’s on the right-hand side, set back from the road in a small line of shops. There’s a solitary round table, under the shade of an umbrella, on the opposite side of the pavement from Foret, on the edge of the busy road. Alternatively, two low stools shelter under the large, over-hanging roof in front of the takeaway window to the right of the door.

Foret is split in half by a wide, concrete pillar. To the right is the door followed by two small, square windows, one of which serves as the takeaway window. Meanwhile, to the left, there’s a floor-to-ceiling window that’s slightly wider than the door. Inside, Foret has an interesting layout, largely dictated by the strange shape of the building.

The counter is on the right, running front-to-back in line with the door, while a short way back on the left is a second concrete pillar, in-line with the first, but rotated by 45°. This effectively splits the interior into a small front section and a large rear one, leaving Foret with an awkward space in the window to the left, where you’ll find two chairs against the left-hand wall. The front of the pillar has at least been pressed into use, containing some retail shelves.

You order at the counter which starts with a La Marzocco Linea espresso machine and a Mythos One grinder, followed by a Mazzer ZM for filter. There’s a small selection of retail bags, then comes the till and a small cake selection. Although ordering when you enter, you pay when you leave.

Foret has a seasonal espresso blend (two Ethiopians on my first visit, an Ethiopian/Brazil blend on my return). First time around, I tried the espresso, which had a beautiful balance, with complex flavours and a great mouthfeel, all served at the perfect temperature. On my return, I was more interested in filter coffee, where I had a choice of eight single-origins, four light/medium roast and four dark roast, one of which is decaf. Like many speciality coffee shops in Japan, single-origins are prepared using a cafetiere, although you can have a V60 if you prefer.

There’s a handy grid on the counter in English and Japanese, with tasting notes and a scale (1-5) for frtuiy, sweetness, richness and darkness for each single-origin. I went for the sweetest/fruitiest coffee, which was the Rwandan. I didn’t specify how I wanted my coffee, so I got the default (cafetiere). My coffee was served by pouring it from the cafetiere through a tea strainer and into a mug. The resulting brew was indeed fruity and sweet, a very pleasant cup of coffee, but I was left wondering how it would have been through the V60. Sadly, I didn’t have time to order a second for comparison.

On my first visit, Foret was baking some scones as we left, so I missed out. This time, I ordered one, served hot with a small jug of maple syrup on the side. It was wonderfully light and fluffy, but could have done with some butter and jam (in my opinion). It’s possible that the syrup was meant as an alternative to sugar for my coffee, but I don’t think so. It didn’t quite work on the scone, but it was interesting to try.