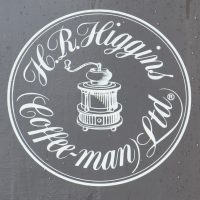 A well-established name in London Coffee circles, HR Higgins has been going in its current form since 1944. A family-run affair, now onto its third generation, I visited the lovely, old-fashioned store on Mayfair’s Duke Street in September, writing up the delightful basement coffee shop. Now it’s the turn of HR Higgins Coffee Man, which features in today’s Meet the Roaster as both roaster and retailer.

Whereas many modern, speciality coffee roasters have a few blends at most, along with a handful of single-origins, HR Higgins is from an era when coffee merchants carried a wide range of beans, reminding me of the likes of Soho’s Algerian Coffee Stores. HR Higgins currently has beans from 23 origins (two of which are decaffeinated), drawn from all the world’s main coffee growing regions, plus eight different blends. These are roasted anywhere from medium to very dark, and, while HR Higgins hasn’t succumbed to the modern trend of light roasts, it has been developing direct trade relationships with various coffee farmers.

If coffee’s not your thing, HR Higgins is also a tea merchant of some repute, with over 40 different loose-leaf teas available, although it received its Royal Warrant as a coffee merchant.

HR Higgins has a modest, old fashioned shop-front on Duke Street. Set back slightly from the street, the entrance is on the left, while to the right is an open lightwell to the basement below, home to the HR Higgins Coffee Room. Inside, a takeaway station/tasting counter awaits you on the right, complete with V60s and an espresso machine. Beyond that, on the right-hand side, stairs lead down to basement coffee room, which is the subject of its own Coffee Spot, while today we’re staying upstairs, where the entire rear half is given over to the retail counter, a lovely wood-panelled affair, behind which stand jars and jars of coffee!

HR Higgins was founded, in its present form, by HR (Harold Rees) Higgins in 1944, making this its 75th year. From the outset, it was both coffee merchant and coffee roaster, utilising an open-flame Whitmee roaster. Originally located a few streets away in South Molton Street, HR Higgins moved to Duke Street in 1986, the roaster (by then a 5kg Probat) being installed in the basement. A few years later, as demand grew, the roastery was moved out to Waltham Abbey, the smaller Probat making way for a 25kg model which is still in use today. In its place, the basement roastery was turned into the delightful coffee room which you see today.

Sadly, the original Mr Higgins passed away in 1968, but his son, Mr Tony, is still involved with the business (for example, the window display is all Mr Tony’s handiwork), while his grandson, David, is in charge of the day-to-day business. The shop, meanwhile, is managed by Preethi, who showed me around.

HR Higgins Coffee Man is a delightful mix of old and new. Many of the customers (who the staff know by name) have been buying their coffee from HR Higgins for decades, and they are still catered for by the dark roasted blends that you’ll find at the bottom of the coffee list. However, the business is also moving with the times, partnering with importers DR Wakefield to develop direct trade relationships with various coffee farmers.

When it comes to coffee, you can buy your beans by weight, in increments of 125g, each of the different origins and blends being kept in large jars behind the counter. This helps give the store its old-fashioned feel, although I am pleased to see that an increasing number of speciality roasters are turning their backs on the modern trend of selling pre-packed bags and are instead returning to this method of retailing coffee beans (although, in fairness, some such as Reading’s Workhouse Coffee never quite abandoned the method in the first place!).

Once you have chosen your beans, the coffee is weighed out in front of you on some lovely, old-fashioned balance scales, then bagged up for you to take home, opening up the opportunity for you to reuse your old coffee bags rather than getting a new one each time. Naturally, I had to try the coffee and, while tempted by some of the single-origins, I opted for two of the blends, the medium-roast Breakfast Blend (Colombia and India) and the dark-roast Creole (Brazil and Colombia).

I’ll be honest: darker roasts are not naturally to my taste, preferring my coffee on the lighter side. That said, the two blends were both enjoyable and I happily drank them through my cafetiere. In the interests of balance, I took them along to a pair of weekend events (the Creole in September, and the Breakfast Blend to an event last weekend). On both occasions, my friends happily consumed them without complaint!