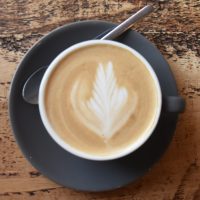 Worcester’s Steam Coffee Shop (not to be confused with The Steam Room, in nearby Birmingham), was a chance discovery from earlier this week. Amanda and I had stopped in Worcester for lunch, intending to visit another coffee shop, when we walked past Steam Coffee, the display of lightbulbs in the window initially catching my eye. A quick perusal of the menu increased our interest and, on discovered that the coffee was from old friends Quarter Horse Coffee Roasters, our decision was made.

Steam Coffee occupies the final shop on the eastern flank of Worcester’s Corn Market, a large, open space opposite St Martin’s Church on the eastern side of Worcester’s compact, medieval centre. Four outside tables on the broad pavement compliment another eight in the cosy interior, which has a simple layout, with the counter at the back. There’s a standard espresso-based menu, the coffee provided by Quarter Horse’s Dark Horse blend, along with a decaf option, while there’s also a wide range of loose-leaf tea from Golden Monkey Tea Co. in nearby Warwick. However, the real draw is the food, with innovative breakfast, sandwich and lunch menus, plus a range of cakes, all made using local ingredients wherever possible.

Steam Coffee Shop is a relatively new addition to Worcester’s growing speciality coffee scene, opening in the summer of 2018 after taking over the premises from the previous occupants, another café. It’s on the ground floor at the northern end of a three-storey row of brick buildings on the eastern side of the Cornmarket, behind which the A38 runs through the city, following the line of the old city walls.

Steam Coffee has a simple, welcoming façade, with a central, recessed doorway flanked by two large bay windows, each hung with the numerous exposed lightbulbs that initially drew my attention. There’s seating on the broad pavement outside, Steam Coffee sporting a pair of two-person tables in front of each window, with views across the Cornmarket to Saint Martin’s Church. Inside, the layout is just as simple, with the counter at the back, occupying the left-hand two-thirds, while to the right is a large chiller cabinet for the soft drinks. Meanwhile, between the two, a short corridor leads to the kitchen at the back, where all the food is produced.

Seating is provided by eight tables, three two-person ones to either side, and two larger, communal tables in the centre. There are also a pair of two-person window-bars, with stools rather than chairs. A long, padded bench runs along the whitewashed left-hand wall, with three tables in front of it. Meanwhile, a further three tables, this time with chairs on both sides, runs along the wood-clad right-hand wall. In the centre, to your left as you enter, is a four-person communal table, while to your right is a six-person one.

You order at the counter at the back, where you’ll find the cakes on the right, the espresso machine and its grinders along the back wall, with the drinks menu above the espresso machine. If you’re looking for food, the breakfast/lunch menus are on the tables, with food served until 15:30. Breakfast starts from 09:00 and is joined by lunch at noon. Finally, there’s a daily specials board on the wall to the left of the counter.

Amanda and I both ordered something from the front page of the menu, which has the breakfast options at the top and the sandwiches/toasties underneath. However, we then saw the lunch menu on the second page and both changed our minds! I had originally gone for the smashed avocado on toast before having my head turned by The Graduate, while Amanda swapped her Halloumi Wrap for the Eggy Waffles.

We did, however, both remain firm on our drinks choice, each enjoying a fine flat white, the Dark Horse blend from Quarter Horse going well with the milk, producing a classic combination with chocolate notes.

Returning to the food, The Graduate consists of a single slice of sourdough toast, topped with smashed avocado and a pair of expertly poached eggs, all drizzled with red pepper jam, which was the perfect blend of sweet and spicy. Amanda’s Eggy Waffles was, as the name might suggest, a whole waffle, coated in an egg wash, and then lightly fried before being split into quarters, each interleaved with a wedge of fried halloumi, the whole ensemble again drizzled with red pepper jam. Both halloumi and waffle were delicious, the latter another perfect combination of sweet and savoury. Lunch-time heaven!