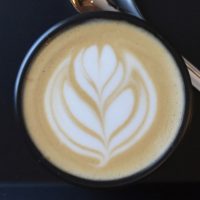 In the wild, coffee has over 120 individual species. However, two species dominate commercially grown coffee: Arabica and Robusta, with Arabica accounting for the vast majority of speciality coffee. Other species are occasionally commercially grown, and last weekend at Terremoto Coffee in New York, Amanda and I were presented with Coffea eugenioides, a rare species indigenous to the East African highlands, including Democratic Republic of Congo, Rwanda, Uganda, Kenya and western Tanzania.

Coffea eugenioides (Eugenioides for short) is, in fact, one of Arabica’s two parent species, the other being Robusta. The Eugenioides at Terremoto was roasted by Neat, a roaster/importer in Darien, Connecticut, and comes from a farm, Las Nubes, in Colombia. Naturally, we had to try it, ending up with a pour-over, an espresso and, to try it in milk, a cortado. Our barista also provided us with a shot of the house espresso (a washed Colombian) and a batch brew sample (a washed Honduran) for comparison!

Normally, I’d write this up as part of my description of the coffee shop, but since Eugenioides is so different from anything that I’ve tried before, I’ve dedicated this entire Saturday Supplement to it, with Terremoto featuring in its own Coffee Spot.

We had no idea what we were in for when we visited Terremoto Coffee last Sunday morning. Initially, I was torn for choice, Terremoto having five single-origins, all available on pour-over, with four on espresso and the fifth on batch brew. However, Amanda spotted the Eugenioides on the menu and asked the barista what it was. When he told us it was a rare species of coffee, we were both immediately sold!

In fairness to the barista, as well as explaining about the coffee, he also warned us that it was significantly more expensive which, for something so rare, is to be expected. He also warned us that it had a very different taste from what we’d been used to, going as far to say that it didn’t really taste like coffee at all, lacking the acidity associated with Arabica. He also explained that, as an espresso, it was far better in milk than it was on its own…

Honestly, this only intrigued us further, so we decided to give it a go, ordering a pour-over and espresso to start with. What follows is an honest description of our impressions of the Eugenioides and is not meant to be a reflection on either Terremoto or our barista, both of whom were wonderful.

Starting with the pour-over, I found it a bit thin, while Amanda described it as “tea-like”, with berry and citrus notes. Although Amanda liked it more than I did, we both noted that it didn’t really taste like coffee. While I’d describe our reactions as neutral at best, that was nothing compared to my reaction to the espresso (Amanda doesn’t drink espresso).

Watching me take my first sip, Amanda said I looked like I’d been hit by a ton of bricks. I describe it as akin to being punched in the mouth. And not necessarily in a good way. It reminded me of my first experiences of really fruity single-origin espressos. My instinctive reaction was “wow, that’s not coffee!”. Not even remotely. After a bit of calm reflection, I decided it was like the fruity hit of a good natural, but without the coffee taste. It was really weird.

Finally, we tried it in milk as a cortado, which is where it really came into its own. The sweetness of the milk really came through, combining with the fruity sweetness of the coffee, taking the edge off the punchiness. The result was absolutely gorgeous, a stunning contrast to the espresso. Amanda loved it too, describing it as cereal milk (that is, milk left soaking in sweet breakfast cereal), which hit the nail right on the head. She has all the best descriptions.

For comparison, our barista gave us a sample of the batch brew, a washed Honduran, which, if I’m honest, tasted equally weird after the roller-coaster ride that was the Eugenioides (but I stress that this was only in comparison to the Eugenioides: it was, in fact, a very good batch brew). Finally, we had a shot of the house espresso, the Mártir from Colombia, an excellent, well-rounded coffee with classic notes of nuts and toasted caramel. Suitably grounded, we went on our way!

In conclusion, I’m glad we tried the Eugenioides (just as, back in my days as a classic, bitter espresso drinker, I’m glad I tried all those fruity single-origins). While not to everyone’s taste (and certainly not to mine as a pour-over or espresso), in milk it was mind-blowingly good. If you serve me another espresso, I might punch you in the mouth, but offer me a cortado and I’ll probably bite your hand off!

6 thoughts on “Trying Eugenioides at Terremoto”