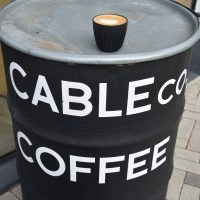 The Aircraft Factory in Hammersmith first came to the attention of the speciality coffee world as the West London outpost of Origin Coffee. However, in November 2019, it became the second location for Cable Co., which began life in Kensal Rise, and which now has a third coffee shop just off the Portobello Road in Notting Hill. Not that you would necessarily know, since The Aircraft Factory is not the sort of place you stumble upon.

There’s not a lot to Cable Co., which occupies a small, glass-walled spot on the right-hand side at the entrance to The Aircraft Factory. There’s a bench outside and a three-person bar against the wall inside, but that’s it for seating (for now). The coffee menu is similarly concise with an exclusive single-origin Colombian, plus decaf, from Climpson and Sons on espresso, backed up by a selection of pastries and cakes.

The Aircraft Factory was home to the Alliance Aeroplane Company, formed in 1918, although these days it is an office complex. Located at the northern end of Cambridge Grove (which ends at the gates to The Aircraft Factory), it’s not somewhere that you casually walk past. However, it’s worth seeking out just to visit Cable Co., which fulfils the role of on-site coffee shop, as well as being open to the public.

Cable Co., which still has its original coffee shop in Kensal Rise, took over The Aircraft Factory site in November 2019. Unfortunately, it was still in the process of establishing itself with the wider public when the COVID-19 pandemic led to a nearly year-long closure, which ended in April this year as the restrictions were eased. By the time you read this, the indoor seating should have been reopened (I visited just before), but given the size of Cable Co., I’m not sure how much of a difference it makes!

When you come through the gates at The Aircraft Factory, Cable Co. is dead ahead, on the right-hand side of a wide entranceway that leads to the main buildings. Long and thin, it’s side on to the gates, tapering slightly to the left, where you’ll find the door. Unusually, the front and side walls are of glass, so it’s a very open spot.

There’s a single bench outside, along with an oil barrel that doubles as a coffee table, while there are plans to put some deckchairs out on a grassy space to the right of the gates as you come in. Alternatively, there’s a three-person bar against the back wall, clearly visible through the front window/wall, but otherwise that’s it for seating.

To enter, go around to the left, where there’s a glass door in the middle of the (glass) side wall. To your left is the three-person bar, while at the far end is the counter, some retail shelves to its left, but otherwise, that’s it. For now, Cable Co. is keeping things simple, with a concise espresso-based menu (batch brew may return at some point this summer) using an exclusive washed single-origin from Inza in Colombia, roasted for Cable Co. by Climpson and Sons.

There’s also a second grinder, which has Climpson’s decaf in it, so, after my overly-caffeinated start to the day, I had that in a delicious flat white, expertly made by my knowledgeable and enthusiastic barista, Cherry. She also did some excellent latte art in the Estate Dairy milk, which held the pattern to the bottom of my HuskeeCup (Cable Co. was only serving in takeaway cups when I visited). Cherry also gave me an excellent cinnamon bun which I took home to enjoy the following afternoon.

For now, Cable Co. is only open on weekdays from eight in the morning until two in the afternoon, and while there are no plans to open at the weekend, as things open up more, it should be open later into the afternoon, so check before you visit.

December 2021: Cable Co., The Aircraft Factory was a runner-up for the 2021 Best Takeaway Coffee Award.