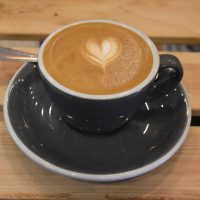 Today’s Coffee Spot was a chance discovery during last week’s Coffee Spot of tour Chiswick. Having been lured over the border into Hammersmith by my friend Adele’s recommendation of Coffee Notes, I was actually on my way there when I walked past Coffee Station and thought “that looks interesting”. So in I went and the rest, as they say, is history.

Coffee Station occupies a modest spot on the south side of King Street in Hammersmith, with a small outside seating area, but the true delight is inside, where the look and feel reminded me of Curio Espresso and Vintage Design in Kanazawa. I visited while Coffee Station was restricted to outside seating only, so was denied the best part of the shop, the large, bright seating area at the back, where the furniture (handmade by the owner) sits under a large skylight with a living wall as a backdrop.

The coffee is from Ozone, the Empire Blend being served from a standard espresso menu, along with a selection of Suki Tea. There are also various smoothies and freshly squeezed juice, while if you’re hungry, there’s a small but classic brunch menu, various salads and a range of cakes.

Coffee Station is a fairly popular name when it comes to coffee shops (London has at least four) so to be clear, this one has no relation to any of the others. It’s about 10 minutes’ walk to the west of Hammersmith Station (and five minutes from Ravenscourt Park Station/Coffee Notes) and has been open for two years, meaning it’s spent more than half its life under the various restrictions brought about by the COVID-19 pandemic. I visited last week, while the staff were putting the final touches to the wonderful back room before the interior seating reopened at the start of this week.

The front of Coffee Station is all glass, the door set slightly to the left of centre. This flanked by some quirky, mismatched furniture, with three large, square stools and a small, round coffee table to the right, plus two small, round stools to the left, accompanied by a long, thin table. These all shelter under a large awning which provides protection from the elements.

There’s more seating inside, starting with a neat pair of armchairs at the front, nestling between the window and the counter on the right. Meanwhile, there’s a small retail selection opposite on the left. The counter itself, a large, wooden structure, runs to about halfway back on the right-hand side, while opposite that are several shelves with an eclectic collection of items, including books, an old typewriter and a vintage radio. Beyond these, still against the left-hand wall, comes an upright piano with a wind-up gramophone on top and then you’re into the seating.

The seating in Coffee Station occupies the rear half of the shop and, being at the back, you might think it would be dark, but far from it. Instead, it’s the brightest part of the whole place thanks to a large, central skylight which takes up much of the ceiling. The seating is arranged around the skylight, benches running in a U-shape along both side walls and across the back. There are a couple of large, square tables at the back, with two smaller, rectangular tables at the front, one for each side. Finally, at the front, there’s a large, round table on the right-hand side, just beyond the counter.

It’s a very green, organic space, with predominantly wooden furniture (all made by the owner) and with plenty of plants, including one in a pot in the middle of the room which reaches all the way into the skylight. However, pride of place goes to the living wall at the back, where the whole of the back wall, from the top of the bench to the ceiling, is given over to plants. Sadly, I was denied the pleasure of sitting in this glorious space, but I’m already plotting my return!

Turing to the coffee, you’ll find Ozone’s flagship Empire Blend in the hopper, while there’s a concise but fascinating food menu, with a selection of salads, old favourites such as smashed avocado and Eggs Benedict/Florentine and various omelettes. Due to the chance nature of my discovery, I only had time for a quick flat white, enjoyed it in a proper cup while sat outside, the Empire Blend going nicely with the milk, producing classic chocolate notes. It was the perfect start to my day!