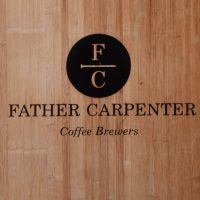 In a city where coffee and cake is the business model for the majority of speciality coffee shops, Berlin’s Father Carpenter stands out for its coffee and brunch approach, no doubt influenced by its Australian owner. Since 2015, Father Carpenter has been serving excellent coffee and fantastic brunches from an amazing courtyard just off Münzstraße in the heart of Mitte, where you can sit outside in the courtyard or be shown to a table in the spacious dining room (Father Carpenter has table service).

Its secluded setting makes Father Carpenter the perfect escape from the hustle of the Mitte’s busy streets, although be aware that it’s very busy itself, often with a wait for a table. I popped by on three separate occasions (four if you count Friday evening, when it was closed) and it was only on my last visit that I was able to get a table without a wait.

Father Carpenter has a concise but interesting brunch menu, along with a small selection of baguettes and pastries. There’s a standard espresso-based menu with non-dairy alternatives and decaf, along with two filter options: regular or exotic, plus loose leaf tea, various iced options and a selection of soft drinks.

Father Carpenter is another legendary Berlin name which was on my list long before my visit at the start of May. Tucked inside a courtyard accessed via a broad, vaulted passageway on the south side of Münzstraße, it’s not immediately obvious from the street, the only hint given by a modest wooden name board hanging on a metal frame. Despite this, it’s very popular, particularly at weekends, although even when I managed to get a seat, early on a Monday afternoon, it was very busy.

Other than spotting the name board, the key to finding Father Carpenter is to look for the large, red “14 oz. Berlin” sign that hangs under the arch on Münzstraße. The long, arched passageway beyond the sign brings you out into a long, rectangular courtyard, ringed by four and five storey apartment buildings which look (to my untrained eye) to be modern reconstructions/restorations of the originals.

A cobbled area runs around the sides, surrounding a central island with low (knee-high) greenery in the front two thirds. The various ground floors are home to different shops, while in the opposite corner stands Father Carpenter, its outside seating on the rear third of the central island. There are six small, round three/four-person tables here, clustered under two round parasols, with three more tables against the wall between the two doors (which we’ll come to).

A sign to the left instructs you to wait to be seated, although if you’re just ordering coffee to go, you can head inside. Otherwise a member of the efficient staff will show you to a table, which can either be outside or in the dining room (the day I was there, everyone wanted to sit outside, so staff were seating people inside before moving them into the courtyard when a table came free).

Father Carpenter occupies three rooms in the corner of the courtyard. The first, accessed through a large door in the back wall, is the kitchen, off-limits to the public, while the second, which is right in the corner, and accessed through a door in the right-hand side of the courtyard, contains the counter. You can go in here to order takeaway coffee or if you want to buy retail bags of coffee, but otherwise, there’s no need.

The final space, the dining room, is to the right of this, accessed from the counter through an opening at the back of the party wall, while it also has its own door from the courtyard. There are eight long, thin tables, each with three or four tall stools, all arranged around the walls, the centre occupied by a small waiting station for the staff.

I’d come for lunch, my final stop before leaving Berlin for Köln, managing to get a table in the courtyard without having to wait. I was tempted by various options on the menu, including the avocado on toast with poached egg. However, I settled on the French Toast, which was different from what I’m used to, but in a good way, being more savoury (but still quite sweet).

I paired this with a filter coffee, naturally going for the exotic, which was a single-origin Ethiopian. Served in a cup, this was a wonderfully fruity brew which proved to be just as good when it was almost cold.

Afterwards I had a quick tour of the premises, where I learnt that Father Carpenter uses coffee from Fjord Coffee, a roastery established by the owner (Kresten Thøgersen) in conjunction with two other Berlin coffee shops, as well as Field Coffee, a more recent operation which started in 2021, again co-owned by Kresten Thøgersen. Finally, I discovered that there would be a second Father Carpenter opening this summer on Potsdamerstraße, one for a future visit!

Liked this Coffee Spot? Then check out the rest of Berlin’s speciality coffee scene with the Coffee Spot Guide to Berlin.