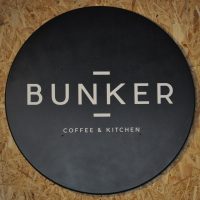 Newcastle’s Bunker Coffee & Kitchen, which opened last summer, has been steadily building a reputation as a go-to place in the city centre for great food, and, it seems, with less fanfare, great coffee too. Equidistant between Flat Caps Coffee and Pink Lane Coffee, and a five-minute walk from Newcastle’s latest addition, Hatch Coffee, it’s just a little off the beaten track, in the shadow of the A167(M) as it carves its way through the city, just east of the centre.

Bunker occupies part of the bottom of a large, six-storey building on Carliol Square, all brick pillars, concrete lintels and large windows, giving it an Art Deco feel. Whether it’s the ground floor or basement is a matter of perspective since the street curves steeply up to the left, the front wall of Bunker following the curve, punctured by four windows. Each of these is at pavement level and consequently, they start progressively further up the wall, each getting narrower until they disappear altogether in the corner opposite the door. Personally I’m going for basement since, even from the double doors on the far right-hand side, you need to descend a few broad steps to reach floor-level.

Once inside, Bunker is a remarkably large, uncluttered space, with an equally large, uncluttered counter at the back, just to the left of a short corridor leading to The Auditorium, the Bunker’s 150-person event space. The counter looks as if it’s made of chipboard, and is flanked by two similarly-constructed chipboard sofa corner seats. The first is to the right, at the bottom of the steps, while the second is in the far left-hand (windowless) corner, beyond the counter.

Most of the seating, three triangular, three-person tables and three picnic tables with attached benches, is scattered around the ample space between the counter and the windows, sharing it with three iron girders which do the important job of holding up the ceiling. The rest of seating is spread out along the front wall. Immediately to the left of the steps are two high tables, projecting out of the wall beneath the first window, the seating provided by high stools. These are followed by a pair of narrow bars under the third and fourth windows, each with similar stools. I liked them, but sadly for me, the stools were simply too small for my ample backside, so it was uncomfortable sitting there for any length of time.

The counter has the food on the right, the daily lunch-time menu chalked on the board to the right, with the salad, wraps and cakes displayed on the counter top. At the left-hand is the coffee, the espresso machine first, then, around the corner, the brew-bar. There are a couple of chairs here, where you can sit to watch your coffee being made.

I had the Zen Box, a mix of three salads, for lunch. I’m not normally a salad fan, but I found this one extremely tasty and filling, approaching the bench-mark for high-quality salads, Daisy Green. I paired it with an Aeropress of a single-origin Brazilian, a full-bodied coffee, with quite a smoky taste, which really held its own as it cooled. It was a great accompaniment to my lunch, whereas something more delicate may well have got lost in the salad’s dominant flavours.