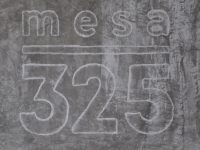 I went to Porto last month in search of Port and in the expectation of the excellent company of my friends, Dave, Ian and Lev. I did not expect to find any speciality coffee, except that which I had brought with me. However, Porto, it turns out, has a lot more speciality coffee than I had bargained for, led by the very excellent Mesa 325. The scene is still very new, though, with Mesa, in many ways the trailblazer, only having been open for just over two years.

Mesa uses a local roaster, Vernazza, offering a fairly standard espresso menu, plus “slow coffee” (which, it turns out, is filter coffee, a single-origin through the Chemex). There’s also Vietnamese coffee (with condensed milk) and affogato (espresso over ice cream). However, this is Portugal, so there’s not just coffee: Mesa has a wide range of cakes/pastries (some Portuguese and some less so) and there’s locally-brewed craft beer, whiskey, port (obviously) and loose-leaf tea.

The setting’s a lovely, cool, stone-lined room, firmly placing Mesa in third-wave coffee territory, rather than Portuguese café territory. Long and thin, Mesa is surprisingly bright, with windows at the front, counter at the back and seating in between.

Mesa 325 is a 20-minute walk east of central Porto, on the broad Avenue de Camilo, which is lined with trees in the centre and parked cars (the coffee bloggers’ bane), at the edges. Despite being just around the corner from the busy 24 de Agosto junction and metro station, it’s relatively quiet. Pleasingly, Mesa is at number 325, occupying the ground floor of a lovely, old, stone-built building. However, it could easily be missed if you weren’t looking for it, with just a short bench and A-board outside to attraction your attention, while the window doesn’t exactly shout speciality coffee.

However, it would be a shame if you passed by without stepping inside. Mesa stretches a long way back, being much larger than the narrow shop front implies. This has a (glass) door on the right, with a floor-to-ceiling window that occupies the remainder of the shop front. There’s a window-bar, which, at half the width of the window, only seats two, while next come a pair of comfy armchairs, backs to the left-hand wall, separated by a small coffee table. The main seating follows, two rows of three four-person tables, one along the left-hand wall, the other down the centre. The right-hand side’s left clear to give access to the counter at the back, although half-way down there’s a pair of high, two-person tables flush against the wall. Beyond that, you’ve got a clear run to the counter, which occupies Mesa’s full width, behind which is the kitchen. There’s one more seating option: a narrow bar on the right-hand wall, just before the counter.

There’s something of the basement about Mesa, which perhaps explains why I liked it so much. The right-hand wall (the end-wall of the building) is exposed, rough-dressed stone, while the left-hand wall is smooth concrete, matching the floor. The generous window floods the front with sunlight, while multiple lights prevent the back from being gloomy. Similarly, high ceilings give it a spacious feel.

I arrived first, trying out the espresso, a blend of Ethiopian, Guatemalan and Colombian beans. This was excellent: smooth, with fruity overtones, easily the best I had in Porto. When Dave, Ian & Lev arrived, we did our best to sample everything. I had a Chemex for one, using an Ethiopian single-origin. Surprisingly heavy and dark, it certainly had plenty of body and flavour. Not exactly what I was expecting from an Ethiopian, but a fine coffee nonetheless. We also managed, between us, a macchiato and an affogato, both of which were very good, while Ian had a locally-brewed Gyroscope India Pale Ale which he was very happy with, although he said it was more American-style than UK-style (if that means anything to you). Lev, meanwhile, had a freshly-squeezed orange juice.

Finally, we thought we should give the cakes a try. Between us, we sampled the natas (Portuguese custard tarts) and doughnuts (not so Portuguese), while I had a chocolate croissant, which was excellent, entirely made by the rich, chocolatey patisserie-crème filling.

Mesa, by the way, is considering roasting its own beans. Bizarrely, local laws prohibit roasting coffee and preparing food on the same premises, so Mesa would have to install the roaster in the kitchen at the back of the store and stop serving breakfast and lunch. Watch this space!