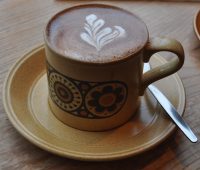 Cumbria’s not renowned as a hot-bed of speciality coffee, but that’s slowly changing, led by local roasters such as Carvetii. I first met Stephen, who plays an important role in this story, in 2015 at the Carvetii stand at Cup North (forerunner of the Manchester Coffee Festival). When I looked for him the following year, I learnt that he had left (with Gareth and Angharad’s blessing) to fulfil his dream of opening his own coffee shop, The Moon & Sixpence, in his home town of Cockermouth, just to the west of the Lakes.

It took me a year to get around to visiting, of course, but finally I managed to call in, just after The Moon & Sixpence’s first birthday, Stephen having opened the shop on 1st October 2016, (which happened to be International Coffee Day, an auspicious start if ever there was one!). Naturally, the coffee is from Carvetii, with the seasonal blend and decaf on espresso, plus a single-origin on batch-brew. This is joined by a selection of tea, plus hot chocolate from old friends, Kokoa Collection. Unusually, The Moon & Sixpence doesn’t offer food, just a range of pastries and cakes, all made in-house by the staff.

The Moon & Sixpence is on the southern side of Cockermouth’s main street (conveniently called Main Street), midway between Station and Challoner Streets. A modest spot, there’s a simple, square window on the right and the door on the left, the shop itself extending back to a depth maybe three times its width. The seating is just as simple, with a table outside on the pavement, and a window-bar inside, running the full width of the window, complete with three orange chairs on swivel-mounts.

The remaining seating lines the two walls, with the counter at the back. On the right, a padded bench runs from the window to the counter, with two four-person tables sandwiching a two-person table between them. On the left, there are also three tables, although these are small, high, semi-circular projections from the wall, each seating two people. These, Stephen told me, are unpopular and due to be replaced in a planned refurbishment.

Beyond the seating comes the counter, which is against the right-hand wall, leaving just enough room on the left to file past to the toilets at the back. This bespoke beauty almost looks like a question mark, with the curved top facing the windows and the stem running back to the back wall. A lovely lighting rig, constructed of copper piping, hangs above the counter, and, I believe, was made by Stephen’s brother-in-law.

The name of the coffee shop, The Moon & Sixpence, is an old one, by the way, even if the coffee shop is new. It harks back to Stephen’s childhood, when the premises was a clothes shop. It’s been through several businesses since then, but Stephen was keen to bring back the old name and maintain the links with the past. Indeed, this sense of community and continuity runs through the business. As well as using Carvetii for the coffee, Stephen has a network of local suppliers, including Kevin, who makes the bread and pastries, as well as working as a barista there, and Melisa, who bakes all the cakes. A local organic farm also supplies produce, which is for sale on the counter.

This sense of community runs through the shop, with the customers feeling as much friends as anything else. Stephen and his staff are very happy to chat and the barrier that sometimes exists in coffee shops, between behind the counter (staff) and in front of it (customers) is entirely absent here.

Much of the shop is fitted out with upcycled materials, including all the cups, which Stephen buys from second-hand shops, often buying single items, so chances are your cup will be one of a kind. Talking of cups, I had an espresso, made with Carvetii’s seasonal espresso blend and served in a red, cylindrical cup. This was lovely, quite sharp on the first sip, but well-rounded on the second. I paired this with a slice of the awesome vegan spicy marmalade and orange cake, which, despite the billing, wasn’t too spicy. It had a great orange flavour and an amazing texture, truly a king among cakes.

At the moment, The Moon & Sixpence, only serves batch-brew, but Stephen’s keen to expand into offering hand-brewed filter, with the preparation method (V60, Aeropress, Chemex and maybe more) chosen to match the particular coffee, so watch this space.

3 thoughts on “The Moon & Sixpence”