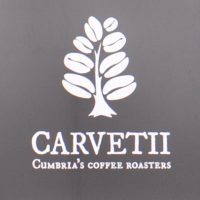 Carvetii Coffee Roasters is firmly rooted in Cumbria, where you’ll find its coffee dotted through the Lake District and beyond. You’ll also find the new roastery amidst the stunning scenery of the northern lakes, in the small village of Threlkeld, east of Keswick. Carvetii moved here in March after five years in its original home, a small, and by all accounts, rather cramped unit.

Carvetii’s new home is a joy to behold, not least for the magnificent backdrop of the Cumbrian Hills. Inside it’s a spacious unit with a mezzanine level, home to the training labs and office, leaving downstairs free for the production side of things, centred on a 12kg Probat roaster dating from 1980, which has seen its fair share of refurbishments and modifications along the way, including new burners fitted just a week before my visit.

Carvetii’s story of steady, organic growth is one which I’ve followed over the years. Cumbria’s not a natural hotbed of speciality coffee and like plenty of roasters around the country, Carvetii’s had to build a market for its coffee as it’s gone along. This means working closely with local businesses, providing them with not just coffee, but with support and training. Indeed, a word you’ll often hear when talking with Gareth and Angharad is partnership, something which Carvetii has in common with Winchester’s The Roasting Party, a very different business on the face of it, but with a very similar philosophy.

The two roasters also share a dislike of guest coffees. In Carvetii’s case, Gareth fears that the trend for using guest roasters is difference for difference sake. He’d rather see coffee shops using guests to highlight something about the coffee and, putting his money where his mouth is, Carvetii is launching an Ethiopian Double Bill, two coffees from the Guji Gigesa Mill, one naturally-processed and one washed. The aim, as Gareth explains, while Angharad prepares two V60s, one of each coffee, is to highlight the impact of processing.

This starts with the green beans themselves. As a rule, washed coffees (where the coffee cherry is removed from the bean by washing) have a uniform blue-green colour. In contrast, naturals (where the coffee’s left to dry in the sun, natural fermentation breaking down the cherry) are more yellow-green, with much more variation in colour. These differences are noticeable in the brewed coffee: the natural was a gorgeous, rich, fruity coffee, bursting with flavour, while the washed had a cleaner, sharper taste. I was given a bag of each to take home and am currently enjoying the washed through my Aeropress, reserving the natural for my pour-over filter when I want a metaphorical punch in the taste buds.

One of the challenges of roasting for a predominantly Cumbrian market is the water, something which has exercised Gareth over the years, to the extent that the new roastery’s espresso lab is split in two. One side is supplied with Cumbrian water, the other, “mineralised” water (Cumbrian water with added magnesium). The aim is simple: every coffee that Carvetii roasts should extract just as well in both waters (you can read a detailed account of this via an experiment that Carvetii ran at this year’s Glasgow Coffee Festival).

Having accounted for water, the latest issue that’s exercising Gareth is solubility/extraction rates. Carvetii’s main output is its seasonable espresso blend and Gareth is concerned that if the different components have different solubility, they will extract at different rates. So, for example, with a blend with a highly soluble component and a less soluble one, pulling a short shot will lead to the highly soluble component fully extracting, while the less soluble one under-extracts, thus throwing the balance of the shot off. I fully expect an experiment/demonstration to appear at the coffee festival at some point…

Coming full circle back to training, having grown into its new space, Carvetii is planning a further expansion, having acquired the adjacent unit, which it will knock thorough. The additional space will allow Carvetii to move its storage next door, with the space freed up under the mezzanine earmarked for the Carvetii School of Coffee, providing training for public and trade alike in 2018. You read it here first!