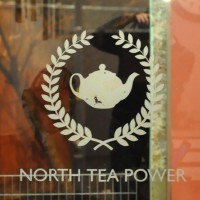 North Tea Power, in the centre of Manchester, is dead easy to find. Start at the Market Street tram stop. Turn your back on the Costa and Nero that face you as you step off the tram and gird your loins when you see the Starbucks on the other side of the road. Head down Tib Street, past the Starbucks, and, after a short walk, you’ll reach the crossroads with Church and Dale Streets. On the other side, on an elevated colonnade running along the right hand side of the street, you’ll find North Tea Power.

Since the summer of 2010, when it opened, many people have considered North Tea Power to be the place to have fine tea and coffee in Manchester and I can see why. It’s lovely and the owners, Wayne and Jane, have poured their passion and attention to detail into every aspect of the place. Come on, you have to admire that level of dedication: they even have rhyming names! This infectious love has rubbed off on everything, including the rest of the staff, making North Tea Power one of the nicest spots I’ve been to for a long while.

Sometimes I fall in love with a place just by walking in through the door. So it was with North Tea Power. Naturally, I had my reservations; after all, it’s called North TEA Power. What sort of deviance is this? However, all my doubts were swept away as I stepped inside and was greeted by the friendly (but inquisitive; it was getting dark so I’d already taken my exterior photos and had been spotted) staff.

So, never mind that it’s called North Tea Power, this place is lovely. It runs back from the window, which looks out onto the elevated colonnade overlooking the street. Inside, there are wooden floor boards with a lovely wooden counter on the right as you come in. As regular readers will know, I have this thing about wood. Around the other two walls there are benches and small tables and in the middle a large wooden table and a high, standalone bar with bar stools. It’s not huge, but it feels spacious and uncrowded. I’ve been in lots of lovely places to drink coffee and North Tea Power is up there with the best of them.

So, what about the coffee? Well, North Tea Power has its own Has Bean blend (Deerhunter) and, as well as the usual espresso-based drinks, there’s a choice of three single origin beans as either a V60 (Rwanda, Brazil ) or an Aeropress (Ethiopia). You can also buy the beans and there are four shelves of coffee making equipment on the wall by the counter, including V60s, Aeropresses and grinders.

You’d think with all that, there wouldn’t be space for anything else, but there is. North Tea Power is true to its name with over 20 loose-leaf teas, including a wide selection of black, herbal and green teas, with a white tea and an oolong to round things off. If that wasn’t enough, there’s Tea Americano, Cappuccino, Latte and Mocha and a Chai Latte. And no, I wasn’t brave enough to try them.

If tea and coffee aren’t your thing, then North Tea Power stocks 15 different bottled beers. And I haven’t even started on the food (pastries, sandwiches and soup) and the large range of cakes and biscuits… And fruit. I’m not sure I can remember the last time I saw a coffee shop serving fruit.

The amazing thing is that North Tea Power seems to do all of these things very well. In that sense it is the antithesis of near-neighbour Caffeine & Co which focuses on doing a few things well.  However, one thing that they have in common is the delightful blue cups…

I had the pleasure of meeting the owners, Wayne and Jane, and their love for North Tea Power is self-evident (I even got sent to photograph their other A-board which I missed on the way in). It’s full of charming quirks, such as serving the loose-leaf tea in a cafetiere rather than a teapot so that customers can see the tea. Ironically, Wayne refuses to serve cafetiere coffee in case the customer leaves it in too long (it over-extracts) or not long enough (under-extraction). Now, that’s my kind of obsessive!

I could go on, but if I haven’t sold North Tea Power to you by now, I doubt I ever will.