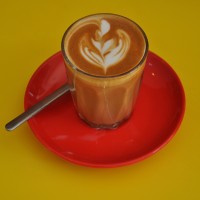 There’s not a great deal to Brewsters N7. It’s the sort of place you could accidentally walk past without noticing, save for the large, unsubtle A-board on the pavement outside, promising coffee. However, step inside and you will be richly rewarded by one of London’s newest coffee shops.

On the northern edge of Islington, halfway between Highbury & Islington and Holloway Road tube stations, Brewsters is one of the smaller Coffee Spots I’ve been too. Not quite as small New York’s I Am Coffee, it’s like a longer, thinner version of Manchester’s Caffeine & Co. Or, for another reference point, it’s about half the size of Bristol’s Small St Espresso.

It’s not so small that there’s nowhere to sit, but the lack of space creates an interesting dynamic since you really can’t avoid interacting with the barista. It’s just as well that Sonny, who was on duty while I was there, is a cheerful, engaging soul. For somewhere that’s so small, Brewsters packs a lot in, including a decent espresso menu, based around Allpress’ Redchurch blend. There’s also food, a decent selection of reading material and some interesting music.

Brewsters N7 has joined a slow, but steady, expansion of good coffee in Islington, joining other newcomer, Vagabond N7, which is a few doors down on the other side of Holloway Road. Vagabond’s been around a little longer than Brewsters though, which had been open for precisely a week when I wandered by, having been alerted to its presence by twitter. That’ll be the place, I thought, as I caught sight of the A-board, and I wasn’t wrong.

The first thing that struck me is how bright Brewsters is. It helped that it was a sunny day and that almost the entire front of the store is glass, but the more I looked, the more I saw that a lot of thought had gone into the interior. This, I find, is often the case with smaller Coffee Spots; the lack of space forces creative thinking. The colours; light grey walls, yellow counter tops and a bare brick wall behind the counter, all add to the sense of brightness, making Brewsters a very welcoming space.

The second thing that struck me was the feeling of space, which, for somewhere so small, is really impressive. Again, the windows helped, but Brewsters has resisted the temptation to pack too much in. The counter dominates the right-hand side, while there’s a bar along the opposite wall with space for five bar stools. You could get another two people on the bench outside. In that respect, it reminded me of the New York City Coffee Spots such as Gimme! Coffee, although Brewsters was a lot less cramped than any of those.

For somewhere so small, Brewsters packs a lot in, with sandwiches, cake, a small breakfast menu, and a pretty decent espresso menu. I also saw an Aeropress which looked like it was ready for action! You can sit at the counter and enjoy your coffee, plus there is a decent selection of reading material on offer. However, in somewhere that small, you naturally gravitate towards the counter and chatting to the barista.

While I was there, head barista, Sonny was on duty. Originally from Sydney, Sonny was brought in to run Brewsters along with fellow baristas, Russ and Mike. All three have musical backgrounds: Sonny is into funk and disco, Russ is a soul DJ, while Mike has his own blues band. The plan is to blend music with coffee, matching particular drinks to specific music, which sounds intriguing.

Brewsters uses Shoreditch roasters, Allpress. Currently there’s just the Redchurch blend, plus decaf on a separate grinder, but Sonny hopes to add a guest blend/single origin in the future. We had the usual discussion about the difference between piccolo and cortado (a Brewsters piccolo is a double shot in a glass; a cortado, a single shot in an espresso cup, both with equal volumes of milk to coffee). However, Sonny’s flexible about definitions: he’d rather find out what you want and make it for you than lay down the law about what a particular coffee should be…

I tried both an espresso and a piccolo. The espresso was very fine, a smooth, full-bodied drink, just how I like it, with nothing too fruity or acidic about it. The piccolo was even better, with the coffee coming through good and strong, with an undercurrent of bitterness.