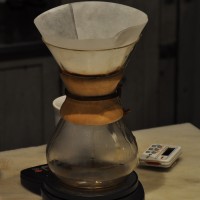 Elixr is something of a legend in the fledging Philadelphia coffee scene. It’s been around for just three years and, as is often the way with such places, it’s already seeded other local coffee shops. Menagerie Coffee, for example, was set-up by ex-Elixr manager, April. It’s also a fairly small world since I ran into Willa (the barista who I met at Menagerie the previous evening) who works weekends at Elixr. Indeed, it was something of a disappointment not to find Willa working in all the coffee shops I visited while I was in Philadelphia!

Elixr offers the usual range of espresso-based drinks, the obligatory bulk-brew filter and hand-poured filter via Chemex. When it opened, Elixr used PT’s coffee, but now the coffee is roasted in-house by Elixr’s owner. While I was there, there were five single-origins on pour-over, with a house-blend and guest single-origin on espresso.

Elixr is another physically beautiful space in a city that’s full of such places. It’s a long, thin coffee shop of the type that I seemed to run into quite frequently on my trip. It was very busy while I was there, and, despite its size, seating was at a premium.

I was in love with Elixr the moment I stepped inside. Long and thin, it has a strange, but nicely done, layout. It runs along Seymour Street and you enter at the far left-hand end, in a small, wood-tiled reception area. This immediately opens out into the first of two seating areas. There’s a bench, window bar and small coffee table with a bench on your right and a large coffee table to your left with a comfortable bench (with power sockets underneath) running around three of the four sides.

Three broad steps lead up between the coffee tables to the main part of the store. You’ll find the counter here on your left, with the kitchen beyond, while on the right there’s a generously-spaced seating area with a couple of communal tables and lots of smaller tables. A pair of armchairs flank one window, while the other window has a table.

It’s the sort of place where you could easily lose yourself for the afternoon. The upper area has wooden floorboards in contrast to the wooden tiles of the lower area, while both parts share a whitewashed ceiling with exposed pipework. The walls are an eclectic mix of wooden panelling, exposed brick and wallpaper, which sounds weird, but which works really well.

Generous windows punctuate the right-hand wall and let plenty of light in, but since Seymour Street is narrow and high-sided, the light is still fairly subdued, which suits the décor. The natural light is enhanced by big mirrors on the left-hand wall behind the counter and big coffee table.

If sitting inside isn’t your thing, there are a series of small, two-person tables running the length of the store on the pavement outside. On the sunny day I was there, these were a viable option and the street itself was quiet enough. As a bonus, Elixr’s Wifi works fine outside.

I’d just come from La Colombe on Dilworth Plaza and was in need of some lunch. Fortunately, Elxir does a small, but interesting, sandwich menu, along with a lovely-looking set of pastries which I didn’t get to try. I had a very fine toasted hummus sandwich, although the hummus was cold, which made for an interesting contrast with the warm, crisp bread.

Since I’d been drinking espresso at La Colombe, I decided to go for the pour-over, particular since Elixr use a Chemex, which is a fairly uncommon choice. There were two Las Brumas beans from El Salvador, but with different processing methods. Since I was anticipating drinking lots of coffee that day, I passed on those, otherwise I’d have been tempted to have a cup of each to compare the impact that the processing methods have on the beans.

That left a choice of Guatemalan, Mexican or Kenyan beans. In the end, I went with the Guatemalan, an El Injerto, which was a good choice. It was very smooth, but not too fruity or acidic. It also sweetened delightfully as it cooled, which made for an excellent cup of coffee.

I had a long chat with the manager, Josh, who told me that sales are split roughly 50-50 between espresso and filter, but of the filter, 80% is bulk-brew. However, he reckons that the sales of hand-poured filter are steadily increasing, which is a good sign.