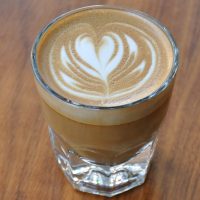 Everyman Espresso is a chain of precisely two (now three) coffee shops in New York City, the original in the East Village, this one on West Broadway in Soho and a third in Brooklyn. I visited the Soho branch largely because it was more convenient, given where I was staying, plus it was the one that several baristas in other coffee shops had recommended.

There’s no obvious menu in Everyman, something I first came across in La Colombe, a neat tactic which means you have to engage with the baristas. Unlike La Colombe, however, there is a printed menu; it’s just kept under the counter so you have to ask for it if you need it.

Everyman Espresso’s tag line is “damn fine coffee”, but it could, in the words of Amanda, my barista, be “damn fine everything”. Not only does Everyman have damn fine espresso, as one would expect, which comes from a very sexy La Marzocco La Strada, but there’s damn fine hand-poured and batch brew filter as well. According to Amanda, there’s damn fine tea (which I didn’t try), to go with damn fine staff and damn fine surroundings. And damn fine Wifi too…

It certainly lived up to its billing…

September 2022: sadly it’s come to my attention that Everyman Espresso’s West Broadway location has had to close. The good news is that Everyman Espresso is still going strong, with the original in the East Village and the one in Park Slope, Brooklyn, both up and running. You can read about more of New York’s lost coffee shops in a little piece I put together about some of them.

Everyman Espresso’s a small space, a few doors along West Broadway from its junction with Canal Street. A couple of benches reside outside, one either side of the door, mirrored by a pair of bench seats in the windows inside. The layout is fairly simple, with the counter ahead of you, but running the length of the store so you have to make your way around to your left to the front of the counter in order to get served. I don’t know why, but it works.

There’s another bench seat opposite the counter, while if you want a table, four stools, two on either side, of the extended island counter that serves as the brew bar enable you to perch and watch the hand-pour filter being made. In all you might get 12 people seated inside if you tried hard.

It’s a very colourful spot, with multi-coloured tiles on the wall behind the counter, flanked in glorious contrast by bare-brick walls. In further contrast, the opposite wall is whitewashed, while the counter and floor are wooden, the ceiling made up of narrow wooden beams. You’d think it’d clash horribly, but it actually works very well.

It was very busy while I was there, a constant stream of customers coming in for takeaway or to compete for the limited seating. A few ordered espresso and drank them standing up, which felt appropriate.

Given the menu situation, I jumped straight in and ordered a cortado and, voila, along it came. And a damn fine cortado it was too. Everyman uses Counter Culture coffee; with the Rustico blend (which I had at Pavement Coffeehouse, Boston) and the unpronounceable Burundian (the Buziraguhindwa, which I had at Boston’s Render Coffee) on espresso. My cortado used the Rustico, which went well with the milk, the little dark/dry hint that I’d detected in Pavement better suiting my mood in Everyman. The milk kept its structure well, but was very bubbly, which might be due to the freshness of the coffee.

During my stay, quite a few customers engaged with Amanda in coffee-talk; one in particular received a very long lesson on making V60 pour-over and Aeropress, which was lovely to eavesdrop on. A barista is many things, educator being one of the more over-looked roles!

I too had a long chat with Amanda, who was excited to be off the following week to Seattle to serve coffee at a major coffee conference. She’s also very keen on coffee cocktails and made me an interesting (non-alcoholic drink): espresso mixed with raw sugar syrup and aromatic tiki bitters poured over ice and then stirred. The result was a very different and very fine drink which my limited palette/vocabulary failed utterly to describe. If you get the chance, ask Amanda to make one for you.

Despite its small size, Everyman is a welcoming spot of the sort that New York City seems to excel at. You might think it would be cramped or rushed, but on the contrary, it’s a relaxed place where you can settle down and feel at home, a real tribute to the staff. Another nice touch is that the drinking water, which, rather than coming out of a jug, is on tap, offering either sparkling or still. It’s the little things that make the difference.