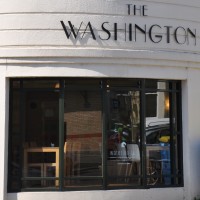 This time last year I went to Cardiff for the first time with my Coffee Spot hat on and I liked what I found. A lot. So much so, that I promised myself I’d be back… So, after trips here, there and everywhere, a year has gone by and finally I found myself back in Cardiff, ostensibly visiting my friend Kate (the tea-drinker), although she knows me well enough to understand that many cafes will also be visited.

First stop was a short train-ride down the coast to Penarth, where the fabulous Waterloo Tea had opened its second outlet, Washington Tea, shortly after my visit last year.

Well, yes it is, and, while it’s true that Waterloo Tea can be found in some of the best coffee shops in the country, the reverse is also true: some of the best coffee in the country can be found in Waterloo Tea… And in Washington Tea too, which also has a full food menu. Brunch is served all day on Sunday and it stays open late on Friday for live jazz, and five-course food and tea events.

Washington Tea is named after the Washington Buildings it occupies on the corner of Stanwell Road and Herbert Terrace, a few minutes’ walk from Penarth train station. An old gallery, Washington Tea is flooded with light, aided by the plain, yellow-painted walls, white-washed ceiling and wooden floor. Instantly similar to the original Waterloo Tea, it’s simultaneously very different: much more spacious and open, with fewer cosy spaces, but feeling much less crowded, even when busy.

Starting on the left, you enter via a raised platform, set back from/above the pavement. It has four tables, and can be part-covered by an awning to give protection against the elements. The shop itself is up another two steps and through a floor-to-ceiling glass door in a row of floor-to-ceiling windows. To your left is a communal table with eight stools, while behind it, opposite you, is the counter. The remaining seating is to your right in the other part of the building.

There are 10 tables here, mostly seating four, but with a few two-person ones thrown in for good measure. The layout is slightly confused by the curving frontage of the corner, not helped by a half-length wall in the middle of the room, which further subdivides it. At the far end, on the left, a second door opens onto Herbert Terrace.

Whatever the pros and cons of the layout (possibly the only con is it makes my head hurt trying to describe it), the interior feels spacious and uncluttered, making it a lovely place for breakfast, lunch and afternoon tea, or coffee and cake (tea and cake, if you must) any time of the day.

So, to business. I counted 68 teas (15 black, five white, three Puerh, one yellow, nine Chinese green, eight Japanese green, seven oolong, six Rooibos, four fruit and 10 herbal). Out of this bewildering selection, Kate had Blood Orange (Puerh), which smelt gorgeous, but had surprisingly little taste. It was, however, quite pleasant. I went for a flat white, made with some Nicaraguan Has Bean. This came strongly through the milk and was a great way to start the day. The coffee is rotated on a roughly weekly basis, with various roasters being represented. Before Has Bean, Washington Tea had James Gourmet Coffee, with Round Hill Roastery lined up to take Has Bean’s place on the grinder.

When I was at Waterloo Tea, I made a major mistake in not having cake, so we rectified this, even though it was before 11am. Kate had the pear and ginger cake, while I selected the sweet potato and mixed berry cake, largely because it sounded horrible and therefore (so my reasoning went) had to be really good. As it turned out, I was right! It was sweet, moist and extremely tasty!

As a closing note, we ordered at the counter, but in the ten days since my visit, Washington Tea has changed to table service. Damn, out-of-date already! I guess that means I’ll have to go back…

March 2016: You can also see what I made of Waterloo Tea’s latest branch, the city-centre Wyndham Tea.