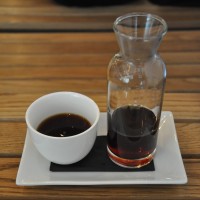 Sharps Coffee Bar, on London’s Windmill Street, is one of a new breed of coffee shops sharing premises with other businesses. Historically it was bookshops, then bike shops, along with the odd record store and laundrette. And now barbers.

I first visited towards the end of last year but, having heard news of change on the grapevine that is twitter, I popped back a couple of weeks ago. However, for the second Wednesday running, I find myself writing a Coffee Spot Update where the answer to the question, “so what’s changed?” is “not much”.

At least, not yet, and not to the casual visitor. The seating is laid out a little differently from my previous visits, and the coffee menu (although not what’s on offer) has changed. Other than that, the sublime lines of the Kees van der Westen Spirit Triplette are still there, as is the Mahlkönig EK43 grinder. The same variety of coffee is on offer: espresso, batch-brew filter and Aeropress, all with regularly-rotating roasters.

The main change is behind the counter, where David Robson, ex-Association Coffee barista and reigning Scottish Aeropress Champion, has taken over. Or, to use the modern jargon, the coffee will be curated by David.

February 2019: The coffee bar is now being run by Rag & Bone Coffee.You can see what I made of it when I visited.

You can see what I found back in 2014 after the gallery.

Sometimes when someone new takes over, there’s a tendency to throw everything out, the good with bad (not that there was much bad at Sharps in the first place), imposing change for change’s sake. Fortunately, David’s not one of those people. The message, instead, is evolution, not revolution, of building on what’s already there.

So, the first thing to say is that Sharps Coffee Bar, which occupies the front half of the Sharp Barber Shop on Windmill Street, is still the same wonderful place it always was. The coffee’s great, the cakes are delicious and the atmosphere’s as friendly as ever. Possibly even more so.

During my visit, I was fortunate enough to meet Mr Sharp himself, Rory, the man behind Sharps (disappointingly, his surname is not Sharp, but that would be asking too much!). Rory also was keen to stress continuity, having brought David in to curate the coffee and oversee the next stage of the development of Sharps Coffee Bar. I was very impressed with Rory and his commitment to the coffee bar. As he explained it, under David’s curation, he wants the same high quality coffee, but he wants Sharps to be even more accessible, with people treated as guests, not customers.

If you’re familiar with Sharps, you’ll find the same basic layout (window-bar, large counter on the left, seating on the right, barbers at the back). However, since my previous visits, the seating’s been rearranged (not something which David claims credit for). The benches with tables that used to face the counter (great for coffee-watching, but not much good if you wanted to sit with someone, since everyone was in a row) have been turned through 90 degrees. Now there are two pairs of benches with a table between each pair, a much better arrangement, although Rory told me that may change in the near future, with more external seating. There’s another bench and table towards the back (facing the counter) and a bench beyond the counter.

So, what of the coffee? Well, Workshop’s Cult of Done was on the espresso machine, while the Square Mile filters on the menu had just been replaced by more from Workshop. I started with the Cult of Done, served in a lovely, handleless cup, but it was still a little fruity for my palette. It did, however, improve as it cooled. In conversation with David, I tried Hayes Valley Espresso from American roasters, Blue Bottle.  This was very old school, dark roast, bitter taste. Very much my sort of thing, in fact!

I moved onto an Ethiopian Duromina from Workshop through the batch-brew filter. I remember being impressed with the batch-brew (which I still have an irrational prejudice against) the last time I was at Sharps and this was no different. It was gorgeous, a really smooth coffee which in no way suffered from being pre-brewed and kept (for a maximum of 20 minutes) in a vacuum flask.

As if all that caffeine wasn’t enough, I had to have a doughnut from Glazed and Confused. I randomly selected lemon curd, which oozed out of the doughnut at every opportunity and really needed its own health warning (do not eat in proximity to laptops!). It was bursting with flavour, while the doughnut itself was crisp and not too sweet. Perfect!

For those of you wondering how this Update fits into the Coffee Spot’s current Glasgow theme in support of the Commonwealth Games, it doesn’t really, except that while I was at Sharps, David did give me a bag of Glasgow’s finest, some lovely Nicaraguan from Dear Green Coffee. Tenuous, I know, but it’s the best you’re going to get!