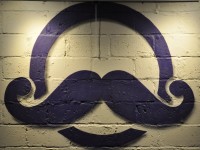 Out front, there’s a cycle shop and sales room, where you can, if you like, sit and take your coffee, while at the back, there’s an equally large room where more typical café seating shares the space with the counter, which itself encloses an open-plan kitchen. If you keep on going, there’s also a large, sheltered garden right at the back. Unless, of course, you’re coming from the station, in which case you reach the garden first, then the café and finally the bike shop. Siempre also has a takeaway window, so you don’t even have to go inside if you don’t want to.

Serving Dear Green Coffee’s Goosedubs blend on espresso, with single origins available as filter from both Dear Green and another local roaster, Charlie Mills, Siempre has got the coffee side of things covered. There’s also an impressive array of tasty-looking cakes, plus a very comprehensive food offering. This being a cycle shop as well as a café, there’s also plenty of secure bicycle storage both inside and out.

I made the trip to the Kelvinhall Metro station on several occasions to watch my now defunct basketball team, the Guildford Heat (now resurrected as the Surrey Scorchers), take on the Glasgow Rocks at the nearby Kelvinhall sports centre. So, I must have walked past the site of Siempre Bicycle Café on many occasions as I came along the long, rather dingy corridor from the metro station to Dumbarton Road. Of course, in those days, Siempre wasn’t there, opening the season after the Rocks moved home and the Heat folded. Which is a shame.

Of the three parts of Siempre, the garden was the one where I didn’t linger too long, it being November when I visited. However, it’s impressively large and looked lovely and sheltered, the perfect spot for the summer. If you’re into your bikes, I suggest you sit in the front, perhaps on one of the window bars that line the Dumbarton Street and corridor sides, or maybe on the three-seater sofa or in one of the accompanying armchairs that are set back from the window on the right as you come in. If you’ve come with friends, there’s a long, tall communal table that runs the length of the front room on the left-hand side, or a couple of smaller communal tables at the back. If you sit anywhere in the front, the staff will come through and take your order.

If you’d like a more traditional café setting, head for the back, either by going in through the garden or corridor, or by passing through the front room. Here the seating is all two- and four-person tables with chairs, plus a very cosy-looking sofa in the far corner.

The front room is more open and spacious, with windows across the front and along the first part of the corridor. Aided by the high ceilings, it’s quite a bright space. There are bikes and bike-kit everywhere and, at the back on the right,  is the counter for the bicycle part of the business.

In the café at the back, it’s all exposed brick and stone. About half of the space is taken up by the counter, which stands on a raised dais, enclosing an open-plan kitchen. This means that you’re enticed by the aroma of cooking… It’s much darker here, with fewer (and smaller) windows and a lower ceiling. There’s plenty of lights, but only half of them were on when I was there on a gloomy Saturday afternoon.

I had a piccolo, using Dear Green Coffee’s Goosedubs blend, which cuts through the milk, but tasted quite dark. Perhaps it was just me, but I’m more used to Dear Green’s lighter-roasted single origins (one of which was available as filter). I also tried the bulk-brew filter, a Columbian single-origin from Charlie Mills. This was one that matured and grew in complexity as it cooled, turning into a very drinkable cup.

The coffee is supplement by an extensive food menu (which I didn’t sample) and a mammoth cake selection (which I did). I had the last slice of apple and cinnamon cake, which was perhaps a little too sweet for my tastes, although there was nothing fundamentally wrong with it. My coffee and cake arrived with a “wee glass of water” and tiny square of fudge, the sort of little touch I appreciate.