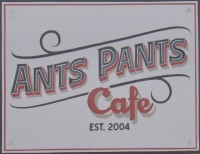 In the grand scheme of Philadelphia’s suddenly booming speciality coffee scene, Ant’s Pants is something of a wizened old establishment, having been around since 2004 (although even that pales into insignificance compared to the likes of Anthony’s Coffee House). It proudly states its Aussie inspiration, going as far as to use Toby’s Estate coffee (Aussie-owned, Brooklyn roasted).

The Aussie heritage also shines through in the emphasis on food; breakfast is served all day (well, until closing time, which is four o’clock) and there’s table service, a novelty in American coffee shops. This puts it more on a par with an American diner, particularly with the emphasis on the food, albeit with better coffee than your average diner.

If all this is too much for you, Ants Pants is conveniently split into two, the front part being much more traditional coffee shop, with a four-seat window bar and the counter down the right-hand side. The second part is at the back, down a short corridor past the kitchen, where you’ll find all the tables (notwithstanding the pair out on the sidewalk).

Except that by the time you read this, there’ll also be an outdoor greenhouse at the back with more seating…

Ants Pants was set up in 2004 with the idea of bringing a slice Aussie café life to Philadelphia. One of the owners, having married an Australian, spent several years down under and, on her return, brought the café culture with her. The result is a very unpretentious, neighbourhood place, which feels very unlike a third-wave coffee shop (after a week of Coffee Spot hunting in New York and Philadelphia, this made a welcome change).

The café’s front can serve as a more traditional coffee shop, with the window bar and outside tables, although you can also have your food up here if you like. It’s dominated by the counter, while the kitchen, perhaps the most important part of Ants Pants, is tucked away behind it, next to the narrow corridor that runs to the main seating area at the back. Surprisingly, given the impressive range of food it produces, it’s tiny.

Ants Pants has a small frontage, but is long and thin, with ceiling fans front and back. The big windows at front provide the only natural light, which makes the front a lovely, bright space. At the back, natural light bleeds in from the front, so it’s fairly dark, although spotlights in the low ceiling at the back stop it being gloomy.

Given the Aussie heritage, I naturally went for a flat white, which was the first I’ve had in a cylindrical mug, which I initially found off-putting. Even though I’m very used to seeing flat whites in my glass Keep Cup, seeing it in a cylindrical, glass mug was a really double-take moment. It was a very smooth drink, with the coffee blending well with the milk and yet coming through very strongly, especially towards the end.

The coffee is all from Brooklyn’s Toby’s Estate, which I missed out on in Brooklyn, so I was keen to try it. I therefore had an espresso, which, on the barista’s recommendation, was a double shot. Again, it was a very smooth coffee, with a touch of sweetness, but no great acidity, bitterness or fruity notes.

Again, given the Aussie heritage, I had to have brunch, selecting Eggs Florentine (on the menu as Eggs Benedict, but I ordered it without the bacon). This being an Aussie place, there was fruit rather than the more American home-fries. It was all lovely, the eggs and hollandaise sauce being particularly good, with the yolks rich, creamy and very, very runny. I always order toast to soak up the yoke, but in this case, not to have had something to dip into my eggs would have close to criminally negligent.

Just in case you think it’s all getting too healthy, there is more traditional American fare available in the shape of pancakes and French toast. All the food looked great, especially the sandwiches. Clearly I need to find a hotel in the neighbourhood so that I can have breakfast there every day and try the whole menu!