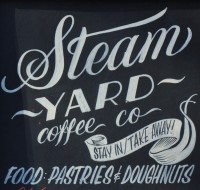 Nothing beats a local recommendation, so when Morrell, head barista at Sheffield’s Tamper, said I should try Steam Yard, literally just down the street from Tamper’s Westfield Terrace branch, I was very tempted. Then I got an e-mail from the owner, Nick, saying I should pop by and that decided it. I mean, it would be rude not to, wouldn’t it?

Steam Yard is located in Aberdeen Court, just off Sheffield’s Division Street, and might be the perfect location for a coffee shop. Aberdeen Court is a fairly small space, lined by two-storey brick-built buildings on three sides, which Steam Yard shares with an alternative clothing store (Rocky Horror) and a tattoo parlour. It’s that kind of place.

You enter Aberdeen Court via a pair of steel gates, tattoo parlour to the right and Rocky Horror on the left. Steam Yard itself occupies the ground floor at the back of the court, with a generous array of outdoor seating, screened off from the rest of the courtyard by a large planter.

As well as a lovely setting, Steam Yard is serious about its coffee, with a house-blend from Yorkshire roasting power-house, Grumpy Mule, and regularly-rotating guests occupying the second grinder.

July 2015: Steam Yard has switched its house-blend to Square Mile.

Steam Yard saw the light of day in January 2014 when owner Nick opted for somewhere with a roof, where he could keep his espresso machine warm overnight. For the previous 18 months, he’d had a Piaggio Ape down by the station, but was tired of waking up at five on a winter’s morning only to find his espresso machine frozen solid. Again. When the back of Aberdeen Court became free, he realised it’d make the perfect café and he’s not wrong!

Steam Yard occupies an L-shaped space running the full-width of the court, the bottom of the L extending a little way up the left-hand side. The outdoor seating is as good as you’ll get, sheltered and set back from the busy street, but not so overshadowed that it doesn’t catch the sun.

Inside, it’s just as good. You can enter at either end of the L. Taking the more conventional one that’s straight ahead of you, in the right-hand corner of Aberdeen Court, you find the door’s actually to your left, pitching you into the top of the L, counter to your right, two two-person tables opposite it by the window, overlooking the court. Beyond the counter, there’s a four-person table and, beyond that, a very comfortable padded bench runs the length of the far wall. This has four, two-person tables in front of it and, in the far right-hand corner, a lovely pair of armchairs, next to a shelf full of interesting bits and pieces.

To the left, through a rectangular opening, the bench continues into bottom-part of the L, with another four tables. Opposite them, next to another window overlooking the court, is a two-person table, adjacent to the second door, which leads to the outside seating.

This preponderance of windows makes Steam Yard a very bright place, helped by a generous supply of lights. These included a row of extremely low-hanging light-shades over the tables at the back which someone considerably shorter than me could bang their head on. As it was, I walloped them every time I got up!

Making a change from the coffee-and-bicycles theme that’s prevalent these days, Steam Yard is coffee-and-motorbikes, motorbikes being another of Nick’s passions. There’s classic 1950s rock ‘n’ roll thrown in for good measure.

Steam Yard uses Grumpy Mule’s widescreen blend on espresso (although since my visit, it has switched to Square Mile), with regularly-rotating guests (a blend from Nude Espresso during my visit). Being a fan of Grumpy Mule, I had an espresso, which was not quite as smooth as some I’ve tried. It had quite a few sour notes, although not in a bad way, just not quite to my tastes. It was also quite a long shot, which I’d become used to in Sheffield and a welcome change from London’s penchant for shorter, ristretto-like shots. I also tried it as a flat white, where it went really well with milk, combining for a real bite, and tasting a lot darker than it did on its own, a great contrast to the sweet flat whites that I’m used it.

To soak up all the caffeine, I paired the flat white with an excellent three-cheese toastie, with apple and ale chutney. This was lovely, with a real sharp tang too it. I was tempted by the delicious-looking doughnuts, but feared the sugar-rush would do me in!