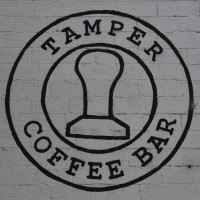 For once, I’ve done a chain in the correct order, having first visited the original Tamper Coffee on Westfield Terrace in Sheffield before venturing down the following day to Sellers Wheel on Arundel Street for breakfast. The contrast between the two in terms of size and scope could hardly be greater; Westfield Terrace is a small, cosy, neighbourhood coffee shop, while Sellers Wheel is much larger, with a strong focus on food, although still retaining Westfield Terrace’s intimacy and emphasis on great coffee.

For those who’ve visited Ozone’s roastery/café in London will be familiar with the concept. Meanwhile if you’ve been to Caravan King’s Cross, there’s a certain similarity in look and feel, although Sellers Wheel is much smaller; you could probably fit four of it into Caravan (eight if you stacked them vertically as well).

In some ways, Sellers Wheel (like Caravan) is two-shops-in-one. You enter into a small area, best described as a coffee lounge, and, if you just want coffee, you could always stay here since it makes a great option by itself. Sellers Wheel proper, though, which is where all the food is, is at the back, through a doorway to the left of the counter.

Sellers Wheel occupies a beautiful white-washed brick building, its windows sporting some lovely wooden shutters. From the street, it doesn’t look like much. Indeed, at first glance it looks as if it’s not much bigger than the original on Westfield Terrace. Stepping inside does little to dispel this notion: you enter a spacious, brick-walled, high-ceilinged coffee lounge, roughly the size of Westfield Terrace. The counter, with espresso machines and grinders, is directly ahead of you, while there’s some comfortable-looking bench-seating to the left and right. It’s bright and airy, with two generous windows and a half-glazed door. Indeed, if this was all there was to Sellers Wheel, it would be a pretty decent option in itself.

However, explore a little and you’ll find, through a door at the right-hand end, the semi-secret board-room, which large groups can book at the weekend. Alternatively,  linger a few seconds and one of the attentive waiting staff will ask if you want a table. Say yes and you’ll be whisked away through the doorway to the left of the counter into the back room. This is even more delightful, with a low, brick-ribbed ceiling, supported by cast-iron beams and pillars. Any thought that it might be gloomy is dispelled by generous windows running the length of the building on both sides, flooding it with light.

There’s a wooden bar, completely with beer taps to the right, while rows of tables stretch out all the way to the kitchen at the back. Immediately to the left is a small, two-person table, which is mine, by the way, although you’re welcome to use it while I’m not there. After that comes five four-person tables along the left-hand wall.  Down the centre, between the pillars, are three two-person tables, while the right-hand side is given over to communal tables, a high, eight-person one by the bar, and a low, 12-seater towards the back, together forming a T. Finally, a window-bar along the right-hand wall, spans two of the windows.

Since I was there for breakfast, I had to have Eggs Benedict, something Tamper’s renowned for. The standard Tamper Eggs Benedict is what others might call Eggs Florentine, with bacon or Salmon available as options. Mine arrived with two eggs, each on its own muffin, and an interesting (and tasty) onion/potato cake resting between the two (new one on me!). The eggs were superbly poached, the yolks creamy and the hollandaise sauce delightful.

All Tamper’s coffee is from Ozone, with the Tamper house-blend joined by a guest on espresso, with two single-origins on pour-over. I’ve always liked Ozone’s coffee, sampling it at the likes of Four Corners. Ozone roasts slightly darker than some, resulting in something of a bite to the coffee, no bad thing at the start of the day. I got things underway with my (when I’m out) traditional flat white, which, despite the bite, was a smooth, very drinkable cup with superbly-steamed milk.

The other area where Ozone has always impressed me is in roasting decaf. So, to put head-barista Morrell through his paces, I followed my flat white with a decaf piccolo. This, I have to say, was impressive, the decaf coming strongly through the milk. This one was slightly fruiter than I remember previous Ozone decafs, but if anything it only enhanced things.

December 2015: Tamper was a runner-up for the Coffee Spot Best Breakfast Award for 2015.