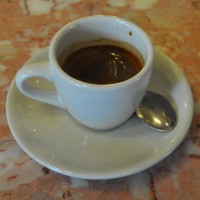 Anthony’s Italian Coffee House, on 9th Street, is a slice of culture/history in Philadelphia’s Italian Market district. Recommended (once again) by my friend and guide, Greg Cohen (of Coffee Guru App fame), Greg comes to the Italian Market to do his shopping. After taking me around several old-fashioned grocers and delicatessens, themselves a delight to visit, particularly if you like Italian food, he abandoned me at Anthony’s (“left” would be a more accurate statement, but abandoned has a more dramatic quality to it, don’t you think?).

Anthony’s is an old-fashioned (in style; Wifi being just one of the concessions to the modern age) Italian-American espresso bar/café of the type that I love. Less grand than say Boston’s Caffé Vittoria or New York’s Caffe Reggio, it has more in common with Soho’s Bar Italia. This, I feel, is much more in keeping with Philadelphia’s working class, blue collar roots.

Don’t come here looking for the latest third wave coffee experience though. The espresso is good, but you won’t find any single-origins or fancy hand-crafted pour-overs (although there is the obligatory bulk-brew filter). Instead, come for a slice of character and history, plus to put your feet up after all that shopping!

Anthony’s Italian Coffee House is an unpretentious place, with a simple, pleasing layout that fits in well with the neighbourhood. The sidewalk is slightly raised from the street and each of the shops in the row has a scaffolding-like canopy constructed out front, which means that you can walk from shop to shop when it’s raining without getting wet (just as well since it poured down the day I was there). It also provides shelter for the pair of tables with distinctive yellow chairs that sit on the far edge of the side walk opposite Anthony’s. A wooden platform, projecting into the street, houses four more tables, this time with more sober, black-mesh chairs. However, these lack protection from the elements, sitting, as they do, outside the reach of the canopy.

If you don’t fancy sitting outside, then step through the door on the right-hand side of Anthony’s. The interior is a simple rectangle, with eight two-person marble-topped tables to your left. Three of these are along the left-hand wall, another three are along a padded bench in the window and the remaining two are in the centre. The window, by the way, stretches the width of the store, making Anthony’s a bright spot, even on the gloomy day I was there. Chandeliers hanging from the ceiling supplement the natural light.

There’s a large, wooden display case which takes up most of the right-hand wall, its shelves stacked full of bags of coffee and other retail goodies. The counter, meanwhile runs across the back wall. It’s lined with cakes and biscuits, while the (very large) menu sits at the right-hand end, hiding the bulk-brew filter and its associated flasks. The espresso machine is at the other end, tucked away at right-angles to the counter behind a large display case, packed with Italian pastries. If you want something more substantial, Anthony’s offers a selection of Panini.

Naturally, I had an espresso, served in a classic white cup. Best described as a dark-roasted, old-school espresso, it was slightly bitter, but not excessively so. Well-made and perfectly drinkable, it was the idea pick-me-up on a wet and gloomy March afternoon. The coffee (Italian Market Reserve) is roasted exclusively for Anthony’s.

While I was there, who should pop in, but Anthony himself! Alerted by my tweets, he’d come over to say hello, giving me a rundown of the history of Anthony’s, a family-owned business with roots that go back over 100 years.

The Anastasio family arrived in Philadelphia from Sicily in the early 1900s. Starting with a pushcart selling fresh fish, they soon progressed to opening a fishmongers. In 1938, the youngest son, Tony, Anthony’s grandfather, opened a greengrocers in what is now the coffee shop. Before Anthony’s grandfather took it over, it had been a butcher’s shop (the hooks hanging from the ceiling date from that time, when they were used to hang carcasses). Although both fishmongers and greengrocers are now gone, the family business carries on, these days dealing wholesale.

Anthony’s Italian Coffee House, which celebrated its 20th birthday this year, came into being in 1995, when Anthony opened his doors on the site of his grandfather’s shop. Ten years later, he expanded into the neighbouring shop to open Anthony’s Chocolate House, which I didn’t have time to visit. Maybe next time…