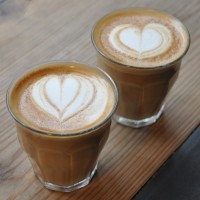 The first thing to say is that Darren was right: the location does make for a great coffee shop. Bigger than either of the other Little Red Roasters, it gives Darren more scope, so you’ll find an extensive range of savouries to go with an even more impressive range of cake, all of which complement The Little Red Roasters true calling card, its coffee.

There’s a bespoke house-blend, plus a single-origin guest on espresso, joined by two single-origins on filter, each matched to a specific brew method (during my visit, a Kenyan through the V60 or an Ethiopian through the Aeropress). There’s also bottled cold-brew, loose-leaf tea and hot chocolate.

Approached from the direction of Strangers Coffee House along Bedford Street, The Little Red Roaster seems like a small, brightly-decorated coffee shop, its central door flanked by two windows. However, appearances can be deceptive, since The Little Red Roaster’s actually two shops knocked into one: the second being further down the hill on the left. Coming up the hill, you reach this door first, while coming down the hill, you go past the first door (which doesn’t open) before reaching the actual door. Clear? Good.

Despite being on a rather steep hill (think the original Boston Tea Party on Bristol’s Park Street), The Little Red Roaster is reassuringly  level inside, stretching away to the right of the door (although there’s a single bench-seat in a nook in the wall immediately to your left as you enter). The layout, however, is one of more idiosyncratic that I’ve seen, dictated entirely by the space itself. Long and thin, with windows all along the front, the seating is all on this side, while the counter dominates the back wall, with precious little space separating the two. While perhaps not the narrowest Coffee Spot (I think that honour still goes to Goodge St Espresso), it’s still pretty narrow.

Immediately to the right of the door is a three-seat window bench, which my guide (Alex from Strangers Coffee House) and I occupied. Next comes a pillar, which marks the boundary between the two shops, beyond which is the bulk of the seating. Three two-person tables are laid out in a row in front of a red padded bench which runs the length of the upper shop and a little way along the far wall for good measure.

At first sight, this is strange, since it means that people are sitting with their backs to the windows. However, it’s a stroke of genius, since a more conventional layout (window-bars all around) would have led to everyone sitting with their backs to the counter, a very anti-social arrangement. Instead, The Little Red Roaster has been transformed into a cosy, social space. You don’t have to interact with your fellow coffee-drinkers, but you no longer feel isolated from the shop and all that’s going on there. This fits with The Little Red Roaster’s no Wifi, no power sockets philosophy of the coffee shop as a space to socialise not to surf.

So, to the coffee. Darren’s been in the business a long time and has links with several established roasters who roast his coffee under The Little Red Roaster label. The house-blend, Little Red Bomb, is a seasonal blend of four beans, one of which is always a natural. We tried it as a split shot, finding it a really smooth, well-balanced espresso. It was just as smooth in milk and also very sweet. Darren, who pulls his espresso shots long (17g in, 40g out), describes it as a very forgiving coffee.

We also tried the guest, an Ethiopian Sidamo natural. Well-balanced like the house-blend, as an espresso, it was bright, but not excessively so, with a really good mouth-feel, sweetening as it cooled. In milk, the sweetness really came out, the coffee blending harmoniously with the milk, which, by the way, is from the local Marybelle Dairy, part of Darren’s commitment to a local, traceable supply-chain.