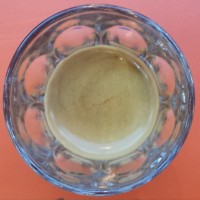 Jonestown Coffee, on London’s Bethnal Green Road, is putting the “lounge” back into “coffee lounge” with an interior that is a throwback to the early years of the millennium, if not the late 90s. That’s not a criticism, by the way; it’s quite lovely inside, very laidback and chilled, which makes a change from edgy hipster places or the “we just threw this place together last night” look. Giant sofas abound, while the décor is dominated by bold, primary colours and strong, geometric shapes, which, after prolonged exposure, can be a bit of an assault on the senses. Unless you sit at one of the two window-bars, of course. Or outside.

When it comes to the coffee part of “coffee lounge”, Jonestown has also gone its own way. You won’t find multiple options on espresso or fancy pour-overs, just the house-espresso, which also goes through the bulk-brewer. What is interesting is the coffee itself, a single-origin from Papua New Guinea, bespoke-roasted for Jonestown by a local roaster. A rare beast indeed, it’s worth a visit just to try it.

There’s also a decent range of sandwiches, as well as soup and salads, backed up with a comprehensive selection of cake.

Jonestown Coffee occupies a strange space on the northern side of the busy Bethnal Green Road, on its corner with the quieter Turin Street. Square in shape, there’s a large chunk of the corner cut off, resulting in a decent outdoor area set back from the street. This forms the front of Jonestown, at 45 degrees to both roads, the double doors at the right-hand end leaving space for a couple of tables to the left. There are also three more tables along the busy Bethnal Green Road.

Inside, the loss of the corner gives it a strange, asymmetric feel, not helped by a large portion of the back being given over to a storeroom, leaving a potentially awkward annex in the corner opposite the door. It’s a bright space, with natural light from the plentiful windows, which also punctuate the walls along Bethnal Green Road and Turin Street.

Talking of windows, window-bars are either side of the door, overlooking the outdoor seating, while those overlooking Turin Street have books lining the windowsills. The bulk of the seating’s ahead of you/to your left on entry.  Straight ahead are some conventional tables, while to the left, against the back wall, is the lounge-part of Jonestown, a huge, communal six-seater corner sofa, arranged with another three/four-seater to form a U shape, the open end facing the door.

There’s a large counter against the right-hand wall, dominating that side of the room, although there’s space for the window-bar at the front and, at the back, the annex has been cleverly turned into a cosy little seating area, a two-seat sofa effectively screening it from the rest of the room. The annex itself has an even cosier sofa, benefiting from a window in the wall behind it.

Other than the laid-back vibe, complimented by quiet, background music and Matt, the laid-back barista, Jonestown’s main draw is its coffee. Papua New Guinea coffee is pretty rare, particularly in the UK. I’ve had it in a blend (Counter Culture’s limited-edition Underdog espresso-blend of Papua New Guinea, East Timor and Burundi) which I tried in Shot Tower Coffee, and I’ve seen it twice as a single-origin filter: in Pavement Coffeehouse, Boston (also roasted by Counter Culture), and La Colombe, Philadelphia.

However, as a single-origin espresso? A first for me! I started with a piccolo, perhaps the largest piccolo I’ve had, more flat white in size (although in fairness, the menu offered “small or large”, so perhaps I should have said “small”). Continuing the “large” theme, I paired this with perhaps the largest slice (slab?) of lemon drizzle cake I’ve ever had.

My piccolo was interesting; an initial hint of bitterness, mellowing with subsequent sips, and ending rather smoothly. On the other hand, this may have just been the sweetness of the cake providing a contrast to the coffee. Either way, I enjoyed it.

Talking of cake, this was two layers of sweet, light sponge, sandwiched together with raspberry jam and topped with a crunch, lemon/sugar glaze. And more raspberry jam for good measure. Sweet, without being sickly, it certainly provided a sugar hit. It was big though: I’d have happily shared it had I not been on my own!

Curious about the coffee, I returned for a single espresso. Arriving in a glass, it was outstanding. The first sip was really well balanced, with a hint of fruitiness. Evolving as I drank it, the second sip was a little more sour, but still very pleasant, while the third and final sip was different again. All in all, very impressive and, in contrast to the piccolo, commendably short.