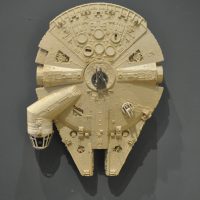 Wormhole Coffee is something of a Chicago institution, certainly in the Wicker Park neighbourhood which has been its home for six years, where it is joined by the likes of the (recently departed) Buzz Killer Espresso and relatively newcomer, La Colombe and Ipsento 606. Wormhole stands out because of its 1980s sci-fi décor, which includes plenty of Star Wars memorabilia (which I guess extends it back to the 1970s) as well as the pièce de résistance, a full-size “Back to the Future” DeLorean on a shelf at the back.

However, while some might be happy with this particular claim to fame, Wormhole does not rest on its laurels. Not just an iconic location, it also serves damn good coffee, roasted in-house by its roasting arm, Halfwit Coffee, which has been around for five years. There’s a pretty good range too, with a house-blend, single-origin and decaf on espresso, joined by a selection of single-origin filters. This includes bulk-brew, Aeropress, V60, and Chemex, plus a guest roaster, also available through the V60. The single-origins on offer change every few days, while the guest roaster changes every month or so. There’s also a range of teas, plus cake if you are hungry.

Wormhole Coffee’s on Milwaukee Avenue, in the north-western neighbourhood of Wicker Park. Set in the ground floor of a rather striking building, Wormhole, for such an iconic interior, has a rather nondescript exterior. It’s pretty much all glass, with a deeply-recessed central door, plus outside seating in the shape of two long, narrow tables with benches, separated from the rest of the pavement by planters and railings.

Inside, Wormhole goes a long way back, a low ceiling adding to a basement-like atmosphere, especially at the back. Although the front is all windows, it faces north-east, so doesn’t catch much light, giving the rear of Wormhole a subdued feel.

The deeply-recessed doorway creates two equally deep window-bays. To the left are four chairs, backs to the glass, centred on a coffee table, a two-person bar against the left-hand wall. To the right, a window-bar runs around all three sides before extending a short way down the right-hand wall, mirroring the bar on the left.

There’s a large gap between door and counter, which starts about one-third of the way back on the left. This leaves plenty of space to queue to order, plus hang around to collect your coffee. Yes, sadly, Wormhole has the American disease of counter service. While you’re waiting, peruse the retail shelves on the left-hand wall between bar and counter. Opposite them, on the right-hand wall, there’s a takeaway station, where you can collect lids, etc, on your way out.

The counter’s a generous affair, its narrow side facing door, where you’ll find the till, and its long side, housing the espresso machine and its three grinders, facing the opposite wall. You can sit here on one of six bar stools that line a long wooden bar running down the counter’s side. Most of the seating, however, is on the right.

There’s a six-person communal table parallel to start of counter, then comes a long sofa against the wall, a two-seater sofa at 90⁰ to it. Opposite the counter’s end is another six-person communal table, then another sofa against the back wall. To the left of this are a pair of back-to-back sofas facing the left- and right-hand walls. Finally, beyond the end of the counter, in the back left-hand corner, is another sofa with a couple of chairs around a coffee table.

Wormhole’s layout and feel are very different when compared to most coffee shops of the modern era, giving it very much a one-of-a-kind atmosphere. Although the actual layout and décor are different, in some ways it reminded me of London’s Jonestown Coffee, although Wormhole is laptop-city compared to Jonestown.

I was in the middle of a long, very caffeinated day, so I went for a decaf cortado. At first I was disappointed, feeling that the coffee did not play well with the milk, leading to a very discordant set of flavours, with a liquorice-like taste predominating. Because of the intensity of the various flavours, I could only take small sips, so I ended up making my cortado last a long time (normally they’re gone very quickly). As a result, this one grew on me as it cooled, and by the time it was cold, it was very drinkable. The milk texture was also impressive, holding the latte art to the bottom of the glass.