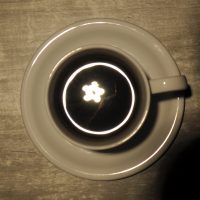 I feel a little bad about taking so long to write up Buzz Killer Espresso, since it was the first place I visited in Chicago when I was there last October as part of my around the world trip. However, given that I’m sort of back in Chicago (I’m actually in Madison all week), it seems the perfect opportunity to rectify this.

Buzz Killer is just off Milwaukee Avenue to the northwest of Chicago’s centre, in the area known as Wicker Park, one of the longer-standing members of a cluster of great coffee shops which includes Ipsento 606, La Colombe and Wormhole Coffee. Buzz Killer roasts all its own coffee, with a house-blend on espresso, plus a blend and a three seasonal single-origins on V60. There’s also decaf, while the bulk-brewer, that staple of the American coffee shop, is mercifully absent.

Buzz Killer occupies an interesting spot, offering a small, sheltered outside seating area and two contrasting floors. Downstairs (which is ironically up a flight of stairs from the street) is full of little tables, tucked away in corners, while upstairs is bright and open, filled with light and with a simple row of tables, plus a large, communal table.

August 2017: Buzz Killer has left its long-time home on Damen Avenue and is moving, in September, to new premises further up Milwaukee Avenue in Logan Square. I managed to pay a visit when I was back in Chicago in August 2018.

On the west-side of N Damen Avenue, Buzz Killer Espresso occupies a large, two-storey building set back a little from the street. On the right, broad steps lead up to the first floor, leaving a sheltered, shady area between the steps and the wall of the neighbouring building on the left. This has enough room for three three-person square tables, screened from the pavement by a row of large planters.

Buzz Killer makes excellent use of an awkward space, with the door at the top of the steps opening onto the right-hand corner. Directly ahead of you, stairs lead up to the second floor, while to the left, across a large, open space, is the counter, which dominates the room. There’s a four-seat window-bar to your left, but otherwise, that’s the only immediately apparent seating. The rest is towards the back, tucked away behind/under the stairs.

The top floor, by the way, is only half a floor, occupying the building’s back two-thirds, giving way to a mezzanine feature at the front. This means that downstairs, it’s quite low at the back, where the seating is, but at the front, which is open all the way to the roof, there’s an immense sense of space.

There’s a little alcove with a four-person table behind the counter, with the rest of the seating on the right, the area effectively delineated by a pair pillars running front to back. These support the upper floor while also splitting the seating area into lots of little spaces. The front-most pillar has retail shelving, while a pair of two-person bars project from the rearmost pillar. To the right, behind and under the stairs, are two long benches, separated by a buttress, each bench with three two-person tables.

Upstairs, the contrast with the small, multiple seating areas downstairs couldn’t be starker. It’s a single, open space, going all the way up to the A-frame roof. There’s plenty of natural light from the windows at the front and from skylights which pierce the roof at regular intervals. The stairs go straight up on the right, ending at a small training room/lab. Off to the left, there’s a single communal table at the front of the mezzanine area, with four four-person tables lining the left-hand wall.

I started with a cappuccino, rich and creamy, with the coffee and milk in perfect harmony. I paired this with a banana financier which was excellent. It had a subtle banana taste and was a cake (rather than a sponge) of some substance, which I liked.

I followed this up with a V60 of the Peruvian La Flor del Sapote (the other choices were a Colombian or an Ethiopian). These are all seasonal and change every three or four months. My pour-over was served in a large mug, and it really evolved and mellowed as it cooled, ending up with a very sweet finish.