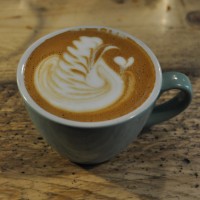 One of my early posts on the Coffee Spot was Edinburgh’s Artisan Roast (the original on Broughton Street). It therefore seems only fitting that my 500th post (depending on exactly how you count them) should be the latest Artisan Roast. This one opened in March this year on the north side of Raeburn Place in Stockbridge, in Edinburgh’s New Town. It was, in some ways, unplanned: I was told that when the space came up, sharing with a florists (The White Petal Company) which no longer needed all the space, it was too good an opportunity to miss. Thus the fourth Artisan Roast was born.

Artisan Roast has a habit of occupying interesting spaces. Of the three Edinburgh Artisan Roasts, it’s easily the biggest, second only to Glasgow’s Gibson Street. However, that’s not hard since both the original, and the second in Bruntsfield, are very much on the small side.  However, it shares a common feature with both those in that it has a cosy back room.

In keeping with all four stores, the coffee’s all from Artisan Roast, with multiple options on filter, plus the house-blend on espresso. There’s also a decent selection of cake and soup/sandwiches for lunch.

July 2016: I’ve learnt that the florists is no more, but the good news is that Artisan Roast is still going strong!

Artisan Roast occupies the lion’s share of the space, the florists restricted to a little triangle on the left-hand side, the opposite side from the door. It’s split into three distinct areas, four if you count the florists, five counting the outside seating (two attractive-looking tables, each with a pair of chairs, on the pavement in front of the windows).

First, there’s the front of the store, three tables occupying prime spots in the windows, opposite the bottom of the L-shaped counter, which houses brew-bar and cake display. Around the corner, on the long part of the L, there’s the till, where you order, followed by espresso machine, three grinders (house, guest, decaf) and a big soup-urn.

Floor-to-ceiling, wall-to-wall windows flood the south-facing area with light. If that wasn’t enough, there’s a skylight above the counter and plenty of lights too! The only downside is the constant of stream of customers for both café and florists, who pass you on their way in and out.

Heading between the counter (to the right) and the florists (to the left), the second space is at the back, two high, round tables, made from old cable reels,  and two, long, thin six-seat tables projecting from the back wall. It’s quieter here, although there’s the noise from the grinders and espresso machine. On the plus side, most of the tables afford an excellent view of the barista in action if that’s your sort of thing. Effectively one continuous space with the front of the store, there’s plenty of natural light, supplemented by a small window in the right-hand wall, plus more lights suspended from the ceiling.

The décor’s a pleasing combination: bare wooden floorboards and counter, wooden furniture and grey-green painted walls. The high ceiling, which contributes to the sense of space, is painted white.

The third space is the cosy back room, which, although well sign-posted, takes a little finding. A long, unfinished-looking corridor runs from the back of the store. The spacious backroom is at the end, on the right-hand side, with its own window on the left. Either side of the door are some interesting table/bench combinations, while at the back, to the left of a lovely-looking fireplace/stove, is another cable-reel table. The highlight is the gorgeous sofa on the right. It’s an ideal escape from the bustle of the front of the café, unless occupied three screaming toddlers…

Artisan offers six single-origins (which are pinned to a board in front of you as you come in) through V60, Aeropress and Chemex. While there’s a preferred method for each bean, if you ask nicely, you can have any bean/any method. However, for what was my first coffee of the day, I had a flat white. Since the regularly-rotating guest espresso was changing over when I came in, I had the ubiquitous Janzsoon house-blend. This was a good, strong coffee with plenty of body, providing dark, chocolate notes that sit on top of the milk rather than blending with it. It mellowed a little as it cooled, the coffee harmonising with the milk.

It was a fine start to me day. While I prefer cosying up in the Mooch on Broughton Street on a cold winter’s day, on the sunny morning I was there, Stockbridge had suddenly become my favourite Artisan Roast!