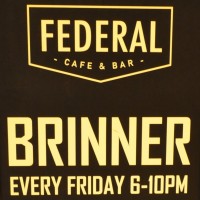 I swear that the good people of Manchester were waiting for me to leave…  I’d been visiting for the inaugural Cup North back in 2014 and no sooner had I left, than it seemed a slew of new coffee shops opened, led by Federal Café & Bar, which, by the way, does what it says on the tin. By day, it’s a café, while by night, it morphs into a bar, although, as I discovered, the staff will happily serve you coffee long into the night (and, I suspect, alcohol during the day).

The coffee side of the equation is handled by Kiwi transplants, Ozone, supplying the Hodson blend and decaf on espresso, with a couple of single-origins on pour-over, impressive when you consider the (lack of) available space. There’s a small selection of wine (five) and beer (four), plus loose-leaf tea, hot chocolate and soft drinks.

Federal’s other main strength is food. This is prepared on-site in an impressively compact kitchen which takes up half of the (not very much) space behind the counter. There are decent breakfast (until noon), lunch (from noon) and brunch (all day) menus, plus, on Friday/Saturday nights, one of the greatest inventions ever, Brinner!

Federal Café & Bar sits on the corner of Back Turner Street and the High Street (at least, that’s what Google Maps tells me, despite an address of Nicholas Croft, which runs parallel to Back Turner Street). Perhaps it’s easier to say it’s just around the back of the Arndale Centre or by the Shudehill metro stop. However you decide to describe its location, it’s worth finding.

Opening in late 2014, Federal Café & Bar is a welcome addition to Manchester’s specialty coffee scene, following on where the likes of near-neighbour, North Tea Power, have led, albeit in a more traditional bar setting. The actual building is wedge-shaped, with, surprisingly, the narrow end of the wedge on the corner, where there’s a solitary window. One of the long sides runs along Back Turner Street (Nicholas Croft), regularly punctuated by windows, while the door is at the far (thick) end of wedge. There’s a row of tables outside, which I felt was somewhat optimistic for Manchester weather, particularly in November!

Stepping inside, the counter is immediately to your left, with the rest of the space to your right, narrowing into the distance. Directly opposite you is a high six-person table with bar stools, while the far wall has a long, padded bench running along it, lined with two-person tables. There are a pair of window-bars along the other wall, with a long, eight-person table between them. Overall the effect is to create a cosy, welcoming space, particularly on the rainy (it is Manchester, after all) evening that I was there.

I was impressed with both Federal’s coffee and food offerings given the (lack of) space. The counter is split in two, with the coffee on the right (where there’s just enough room for a two-group La Marzocco and its grinders) and the kitchen on the left. Despite this, Federal offers the likes of a piccolo on the espresso menu, plus a pair of single-origins on V60 or Aeropress, which change every week. Perhaps it was the setting that led me to think that it would be a bar serving a bit of coffee, but far from it, with the staff all very knowledgeable and passionate about the coffee.

Since it was late, I had a decaf flat white. Having had Ozone’s decaf before, it held no surprises, but it was very smooth, well-balanced and perfect for that time of the evening. Particularly impressive was the milk, which held the latte art to the very end.

The food is equally impressive, particularly when considering it’s all cooked on-site (the cakes are all baked there too). I was there on Friday evening and was delighted to discover that on Friday & Saturday nights, Federal does “Friday Night Brinner” (that is, breakfast for dinner). This is an excellent idea and a natural follow-on from brunch. I was very tempted by the baked eggs, but predictably went for the Eggs Benedict. However, I was torn between having halloumi and avocado, until the waitress said I should have both. She’s a genius.

I thoroughly enjoyed my Eggs Benedict, the eggs being done to perfection and the toast also exceptionally well-done. While I liked the avocado, I didn’t think it particularly complemented the eggs. The halloumi, however, was an excellent match: I’ll definitely be having that again.