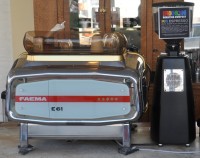 Occupying a spot on the corner of Washington and Flushing Avenues since 2012, it’s essentially a large rectangle, with the long side on Flushing Avenue. Even though it’s north-facing, floor-to-ceiling, wall-to-wall windows on both sides, punctuated by glass doors, flood the interior with sunlight and present a visually-appealing vista from the outside. Rarely have I been so struck by a coffee shop’s external appearance.

Inside it lives up to its promise, with an espresso-based menu served by twin Faema E61s, one at either end of the large counter, which takes up the middle half of the back wall. There are two options on espresso, plus decaf, and, of course, the obligatory bulk-brew. Having got your coffee, retire to one of the window-bars or, if, you can, grab a booth and watch the world go by.

In going from Jay Street to Flushing Avenue, I visited two superlatively-beautiful coffee shops. However, while both are branches of the Brooklyn Roasting Company, in most other aspects they are like chalk and cheese.

Jay Street’s on the ground-floor of an old, rambling warehouse, with high ceilings and exposed stone/brick. Above all, it’s solid. Flushing Avenue feels more modern, a single, open space with windows instead of walls. Above all, it’s light and airy. One is cosy and cluttered, the other clean and bright. And so it goes.

You can enter the Flushing Avenue branch from either Washington or Flushing Avenues, each having its own set of glass double-doors and each pitching you at one end or the other of the counter, a lovely wooden affair with wooden display cases on the wall behind. Normally, this would be a problem, but here it’s been addressed by having an espresso machine at either end of the counter, each with its own till. During less busy times of the day, only one is in operation and, if you arrive at the wrong one, you’ll be gently ushered to the other.

The layout’s very simple. Entering from Flushing Avenue, there are a pair of booths in the windows to your right, easily my favoured choice of seating, but sadly (and unsurprisingly) occupied. To your left, a five-seat window-bar overlooks Flushing Avenue. The Washington Avenue door is right on the corner and, entering that way, there’s a four-person window-bar to your left, both window-bars having fixed, well-spaced wooden bar stools.

The rest of the seating is provided by a series of tables. There’s a four-person one at the Washington Avenue end of the counter, and another at the other end, across from the booths. Both are free-standing in the middle of the floor. Finally, there are two beautiful, marble-topped, square tables mounted on old, industrial gearwheels, each with a pair of chairs, arranged in a straight line between counter and the Flushing Avenue window.

The floor is covered in small, hexagonal, marble tiles and feels quite old, which is backed up by some gorgeous old-fashioned tiling in the gents toilets (I didn’t check the ladies!). Whereas Jay Street is all shadows and contrast, Flushing Avenue is bright and uniform, the natural light complimented by the yellow-painted walls and the white-washed ceiling. However, one thing that the two branches do have in common: while their windows are great, the views out of them are no so great. Oh well, you can’t have everything!

Another difference is that Flushing Avenue serves a much-reduced espresso menu, although it still manages the BQE house-blend, a guest (the IRIS blend during my visit) and a decaf (a Peruvian). Having tried the IRIS as a straight espresso at Jay Street, I took the opportunity to see how it went in milk by having a cortado. Although going well with milk, it lost some of its fruity notes, coming across as slightly smokier, giving it a surprising bitter note that wasn’t there as a straight espresso. I think you can guess which I preferred.

Flushing Avenue does a range of pre-prepared food with sandwiches, cookies and pastries in the middle of the counter, while a chiller cabinet offers salads and wraps. There’s also fresh fruit and oatmeal pots for breakfast.