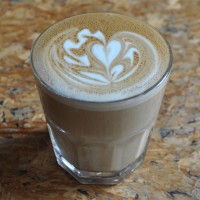 The sister branch to Fix Coffee, a long-standing Shoreditch coffee shop which first opened its doors in 2009, Fix 126 arrived not long after on Curtain Road. Serving a bespoke espresso blend plus a single-origin V60 pour-over (both from Climpson and Sons), Fix 126, like its roaster, flies a little bit under the radar, quietly doing its own thing, while, over the years, more illustrious names have popped up on neighbouring streets.

A bright, airy space, with exposed-brick pillars between the numerous windows and a lovely, wooden floor, it has the “hipster coffee shop look” nailed, except Fix was doing it several years before it was trendy.  The layout is simple and uncluttered, with communal tables in the centre, window-bars around two of the four walls and a cosy little nook at the back.

That I made it to Fix 126 at all is down to fellow blogger, Jess, of EastingEast, who invited me to a pre-London Coffee Festival breakfast, a proposition I agreed to with unnecessary haste, before regretting as I dragged myself out of bed on Saturday morning an hour earlier than was strictly necessary. However, all was forgiven when I discovered what a gem Fix 126 is.

On London’s Curtain Road, one street over from Origin’s outpost on Charlotte Road, Fix is pleasingly located at number 126, on the corner with Rivington Street. There are generous windows overlooking both streets, the front (looking out onto Curtain Road) in particular being almost all glass, while Rivington Street is not far behind in the glass-to-wall ratio. The Curtain Road side also has an awning to shade the benches which flank the door from the afternoon sun, although I suspect it gets more use in keeping the rain off, something it did admirably well on the morning I was there!

Windows notwithstanding, the exterior’s painted black, making an interesting contrast to the bright, spacious interior, where black’s only found on the ceiling and on half of the back wall. Elsewhere, exposed brick and wood abound, along with an interesting blue-and-white geometric-patterned wallpaper. Meanwhile, two slim, white pillars support the ceiling beams.

The layout’s simple and effective. Four-person bars line the windows, while there are three long, communal tables (each with seven chairs), running parallel to the windows in the centre/left of the roughly square space. At the back, on the left-hand side, a small flight of steps leads to a small, cosy, nook. With padded benches around its three walls, it’s the ideal spot for a quiet tête-à-tête. Finally, on the right-hand side, there’s a chiller cabinet (holding sandwiches and soft drinks), followed by the counter, which occupies most of the right-hand wall.

The coffee, except for the decaf from Caravan, is from Climpson and Sons, a small detail which I’ll take up with Henrik when I see him next… Fix has a bespoke espresso blend, equal parts Brazilian and Peruvian, resulting in a dark, full-bodied roast. Jess already had a long black on the go when I arrived, while I indulged in a flat white, which arrived sporting an impressively intricate piece of latte-art. The coffee stood out in both forms, the flat white in particular making a pleasant change from the sweet flat whites that I’m more used to.

Fix 126 also offers pour-over through the V60, with a single-origin bean that changes on a monthly basis. During our visit, this was an Ethiopian and, keen to try it, but with the knowledge that we had a full day at the London Coffee Festival ahead of us, we split a small V60 between us.

I still struggle with my V60 technique, so was intrigued to watch the barista at work. She used an almost continuous pouring technique, with a long, swirling pour, something I’ve not seen very often. However, the outcome was excellent, a delicate, floral cup, but at the same time with plenty of body.

Since this was technically a pre-festival breakfast (and I hadn’t eaten) I had a toasted mozzarella, sun-blushed tomato and chargrilled vegetable brioche. Not having had a toasted brioche before, I was somewhat surprised by its outward appearance (think Scotch pancake/drop scone): however, it tasted just fine and must have done the trick since I managed to go the next eight hours without eating anything…

Jess, meanwhile, cheated and had two things for breakfast, an almond croissant and a rather yummy (and, she claims, energising) smoothie. You can also read Jess’s take on Fix over on EastingEast.