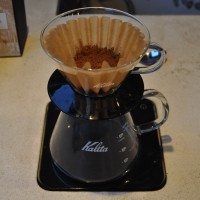 Once upon a time, it was quite hard to get Cornwall’s Origin Coffee Roasters in London, with Selfridges being your best option, along with Artigiano Espresso. These days there’s also the likes of Jika Jika on Euston Square and now, there’s Origin’s own café on Charlotte Road in Shoreditch (where else?). This is very much a flagship café, designed to showcase Origin’s considerable range of coffee, particularly the single-origins. It also doubles as Origin’s London training base, with a large training room in the basement below.

It’s not a huge space and it’s remarkably uncluttered, leaving the focus firmly on the coffee, something which is reinforced by reversing the normal order of things on the counter. A typical coffee shop puts the cake/food first so that customers will file past it on their way to order, hopefully tempting them as they go.

At Origin, the cake is tucked away at the far end of the counter and the prime spot, clearly visible through the window, is the filter bar. Here pour-over coffee is prepared in full view of anyone who wants to sit and watch, as well as anyone wandering past on the street outside. Now that’s a statement!

Origin’s quite small, but, despite this, feels very spacious. There’s a large window at the front, overlooking Charlotte Road, with the door (often propped open) on the right-hand side. There’s also a bench on the pavement in front of the window. Stepping inside, you are immediately greeted by stairs leading down to Origin’s basement training school (sadly off-limits to coffee shop customers) so you’ll need to do a quick side-step to the left for the coffee shop proper.

This is dominated by the counter, which takes up half the left-hand wall, filter bar by the window, espresso machine and twin grinders in the middle, followed by the till and then the sandwiches and cake at the far end. The remainder of the wall is taken up by a set of retail shelves.

Other than the three stools (the best seats in the house in my opinion) at the window end of the counter (at the filter bar), the seating’s arrayed against the back and right-hand walls, leaving the middle of the room a large, open space where you can wait for your takeaway coffee without feeling as if you’re getting in the way. At the back, there’s a large, communal table, while tucked in beside it, and beyond the stairs to the basement, is a bench against the right-hand wall with a pair of round two-person tables. The only other seating is a six-seat bar running alongside the stairs opposite the counter.

Although the window at the front is generous, it’s west facing, the narrow Charlotte Road not getting much light in the first place. Therefore, the abundance of lights is welcome, while the long, narrow mirror on the back wall also adds to the sense of light and space.

However, as pleasing as the interior is, the main draw is the coffee, with Origin offering its Pathfinder blend plus a single-origin on espresso (while I was there, this was a washed Ethiopian Suke Quto). There’s another single-origin on bulk-brew (Nicaragua Finca Los Altos) with two more available at the filter bar using the Kalita Wave. Full tasting notes, including processing method and growing altitude, are available on the coffee menus which are liberally scattered around the place. The baristas are also happy to offer advice and discuss the options.

Typically a coffee will stay on for a couple of months, although if the baristas really like it, they will keep for as long as they can. I was after filter, with a choice of a washed El Salvador Finca San Antonia or a natural Ethiopia Nekisse N2. The latter was recommended by barista Will and expertly made by his colleague Jack, who put up with me taking photos and asking endless questions while he did so.

For those who are interested, Origin puts 20.8g of beans into the EK-43 grinder, getting 20g out. To keep the grind size uniform, the grinder isn’t knocked afterwards, so any chaff tends to stay in the grinder (although obviously it’s knocked out before the next batch is ground!). Origin’s recipe calls for 300ml of coffee, with a five-minute extraction (approximately), which Jack hit spot on.

The resulting coffee was a lovely brew, with far more body than I was expecting (I don’t associate body with Ethiopians) but with lots of complex, fruity flavours.

You can also see what fellow coffee-blogger Bex made of Origin when she visited on Easter Sunday (spoiler alert: I think she liked it!).

You can also see what I made of two more of Origin’s London Outposts, its Espresso Bar at the British Library and its coffee shop on Euston Road.